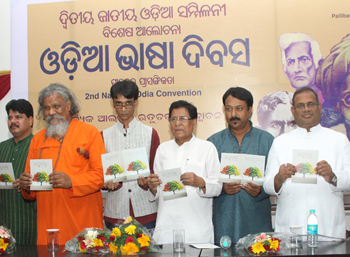 Odisha Channel Bureau Bhubaneswar: Odisha government should officially celebrate an Odia Language Day every year as a measure to protect the classical language from losing its popularity.This was demanded by the speakers at a convention on the language held in New Delhi on Saturday.At the 2nd National Odia Convention organised by Pallibani Mission, a New Delhi based literary organisation, the speakers appealed all to come forward in preserving the classical status of Odia language with its frequent usage in official and educational purposes.A special dialogue on Significance of Celebrating Odia Language Day was held on the occasion. The convention was inaugurated by Union Petroleum Minister Dharmendra Pradhan.Lok Sabha Member Prasanna Patsani, Rajya Sabha Member Baishnab Parida, Rajya Sabha Member Rama Chandra Khuntia and many other dignitaries were present.Some of the speakers also criticised the changes made into the Odia grammar book Barnabodha, according to an official release. This year’s Pallishree Samman was conferred on Odia researcher Nagendra Mohanty and ITDC Director (Finance) Trinath Behera for their contribution in the field of social and public services.A poetic album `Rutu Chakra’ by Kulamani Biswal was released on the occasion followed by a musical event by singer Sushmita Das and others.