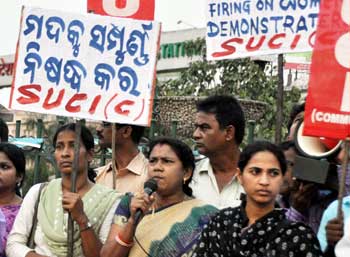 Odisha Channel Bureau Bhubaneswar, Mar 11: Opposition legislators today stalled the proceedings of the Odisha Assembly while blaming the Naveen Patnaik Government of promoting alcohol consumption and repressing anti-liquor agitations across the State.The proceedings were adjourned twice in the pre-lunch hours with the opposition legislators criticising the government over the police excesses during an anti-liquor protest in Namtara village in Rajkanika area of Kendrapara district on March 8.The legislators, however, did not raise slogans or enter the well.They just stood up from their chairsto protest against the police action.While the Congress members displayed a torn saree collected from the incident site and showed banners condemned the State government’s pro-liquor mafia policy, BJP Legislature Party leader Basant Panda displayed a live bullet collected from the spot of the incident.One of the banners displayed by the Congress legislators read: `Mada Pia, Nahele Gooli Khao’ (consume liquor or else face bullets).First the proceedings were adjourned till 11.30 and then 12.30.Normality, however, was restored when the House reassembled at 12.30 as the Speaker allowed a discussion on an adjournment motion moved by the Congress on the issue.As many as nine villagers were injured when policemen resorted to firing and lathi-charge in Namtara village.The victims are undergoing treatment at SCB Medical College and Hospital at Cuttack.Police have arrested six persons of Namtara village for ransacking a liquor shop near their village and torching a police vehicle.The armed policemen had entered the village and lathi-charged the people and restored to firing hours after the anti-liquor protestors, mostly women, ransacked the shop and torched the police jeep.