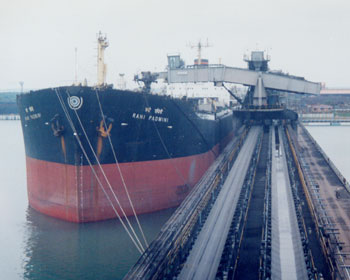 Odisha Channel Bureau Paradip, Mar 19: Paradip Port Trust has achieved record cargo throughput of 68.05 million metric tonnes till March 18, 2015 and surpassed last year total traffic throughput of 68 million metric tonnes.This is the highest ever traffic handled by the port in a financial year.According to an official release, Paradip Port Trust is confident in achieving the target of 69 million metric tonnes fixed by the Ministry of Shipping for the current financial year 2014-15 and is expected to retain its second position amongst all major ports in terms of traffic throughput.Traffic handled by the port as on March 18, 2015 is 68.05 million metric tonnes as compared to 65.45 million tonnes handled during the corresponding period of previous year with an annual growth rate of 4 percent.During the current financial year up to March 18, thermal coal traffic has exhibited a growth of 20.78 percent, coking coal increased 11.56 percent and fertilizer raw materials traffic grew by 10.66 percent compared to the same period of previous year.M.T.Krishna Babu, Chairman and N.Vaiyapuri, Deputy Chairman, Paradip Port Trust have appreciated the co-operation and support extended in achieving the record throughput and conveyed their gratitude to Union Ministry of Shipping, Government of Odisha, East Coast Railway authorities, stevedores, exporters, importers, steamer agents, district administration, trustees of the port, port users, trade unions and media representatives along with all the employees and all other stakeholders who are connected directly or indirectly for overall development of the port.