Modi launches `Give it up’ campaign

Odisha Channel Bureau New Delhi, Mar 27: Prime Minister Narendra Modi today appealed to well-to-do sections of Indian society to voluntarily give up LPG subsidy, so that the benefit of the same could be shared more widely with poorer sections of society.Delivering the inaugural address at the global energy summit Urja Sangam-2015 here, Modi said about 2.8 lakh people from across the country had already given up LPG subsidy.He said this was an important contribution for the service of the poor. 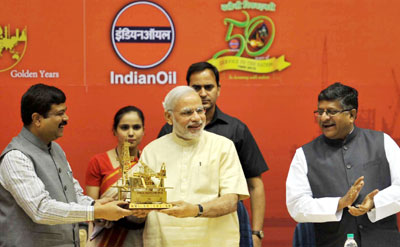 The Prime Minister called for enhancing domestic production to reduce the energy import burden of the country by at least 10 percent, till 2022 – the occasion of the platinum jubilee of India’s independence.He complimented ONGC Videsh Ltd, Engineers India Ltd, and Barauni Refinery, for their successful journey of five decades, and called upon India’s energy sector to plan for the next five decades with a global perspective.India, with one-sixth of the world’s population, should shoulder one-sixth of the world’s energy responsibility, hence contributing to global prosperity, he added.The Prime Minister highlighted various achievements of the Union Government, and reforms initiated in the energy sector over the last ten months.He said these reforms were motivated by the quest for greater energy security, which is both a necessity and responsibility.He said transfer of LPG subsidy directly into bank accounts through the world`s largest cash subsidy transfer programme in the world – PAHAL – had resulted in elimination of leakages, and curbing corruption.He also mentioned deregulation of diesel prices, ethanol blended petrol to help sugarcane farmers, promotion of bio-diesel, and extension of the gas grid in eastern India, as some of the other major initiatives of the Government.The Prime Minister announced that the Union Government aims to extend piped natural gas (PNG) to one crore houses over the next five years.He called upon Indian energy companies to become multinational; work towards India-Middle East, India-Central Asia, and India-South Asia energy corridors; and establish gas positions in North America and Africa.Union Ministers Ravi Shankar Prasad, Dharmendra Pradhan, Nirmala Sitharaman, and Nasrul Hamid, State Minister for Power, Energy and Mineral Resources of Bangladesh, were present on the occasion.