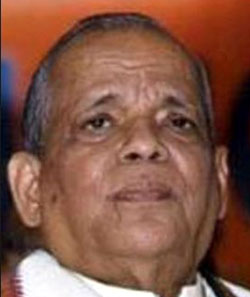 Odisha Channel Bureau Bhubaneswar, April 21: As hundreds of people gathered in the city to pay tributes to veteran Congress leader Janaki Ballabh Patnaik, politicians cutting across party line in Odisha paid rich tributes to the leader who died at Tirupati early today.Prime Minister Narendra Modi also condoled the passing away of J.B.Patnaik.”J.B.Patnaik’s contribution to Odisha’s development will always be remembered.Saddened on his demise.Condolences to his family.Shri Patnaik will be remembered as a pillar of Odisha politics, a popular leader always connected with people’s views and aspirations,” Modi said.“J.B.Patnaik will be remembered as a multi-faceted personality that influenced the socio cultural and political life of Odisha for a long period.His death marks the end of an era in Odisha politics,” said Chief Minister Naveen Patnaik.“I am deeply distressed at the sad demise of former Chief Minister, veteran politician and great literary figure Janaki Ballav Patnaik.It is really very disheartening and a huge loss to the State.He was a great figure in Odisha Politics known for his political acumen and administrative ability, who withstood the test of time in politics,” said Patnaik in a message. 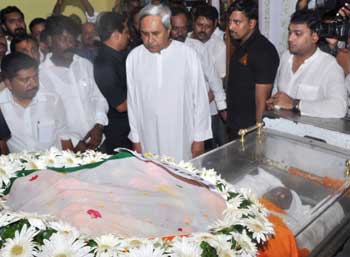 The Chief Minister said that the late leader had profound knowledge in a range of subjects in art, culture, tradition and literature.“He himself was an erudite scholar as well as an acclaimed journalist.As Union Minister and Chief Minister for a long time, J.B.Patnaik immensely contributed to the development of the State.”“As the leader of opposition in Odisha Assembly he contributed immensely to the legislative process and was always constructive.During his tenure as Governor of Assam, he played a key role in strengthening cultural ties between Odisha and Assam.He was an institution in himself.What is more significant that he remained relevant in public life till his last breath,” said the Chief Minister.Union Minister Dharmendra Pradhan said Janaki Ballabh Patnaik was rare leader who influenced the politics of Odisha for long years.The demise of J.B.Patnaik marks the end of an era in Odisha’s politics and literature, Pradhan said in his message.Among others who paid rich tributes to the former Governor of Assam and three times Chief Minister include Odisha Pradesh Congress Committee president Prasad Harichandan and Odisha Jan Morcha president Pyarimohan Mohapatra.Many social and cultural organisations of the State also paid rich tributes to the Congress veteran who passed away at around 4 am in a private hospital at Tirupati.