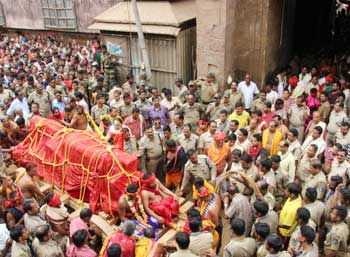 Odisha Channel Bureau Puri, April 24: Over two lakh devotees marched in a procession along the Bada Danda with the Daru Sagadi of Sudarshan towards Shri Jagannath temple this morning.Bada Danda reverberated with Hula Huli, Jai Jagannath and chanting of Vedic hymns by the devotees who were jostling to have glimpse of the Daru.The massive presence of devotees in the Daru procession gave impression of observance of mini Rath Yatra.Several Sankirtan teams, religious flag bearers along with musicians playing trumpets, cymbals and blowing of conch were leading the Daru procession.The Sagadi (a four-wheel wooden cart) carrying the Daru of Sudarshan wrapped with seven layers of Patta (silk) tied with Pattabasunga a special type of rope began its homeward journey from Gadakantunia village near the Balakati to Srikshetra.Hundreds of devotees were pulling the Sagadi alongside the Daiatapatis.On the way to Puri the Banajagis on the Tuesday night rested for the night at Pipili Batamahavir temple and resumed their march the next day afternoon.On Wednesday they arrived at the Biragobindpur and stayed in the nearby Shiva temple for the night.On Thursday they reached Puri and as per tradition stayed near the Alamchandi temple near Atharnala for the night.On Friday they resumed the march to the Sri Jagannath temple at about 8.30 n the morning.It took about two hours to reach the destination.The Daru Sagadi was taken into the Koili Baikuntha through the North Gate of the temple.The Daru along with the Sagadi was escorted to the Koili Baikuntha and placed in the Darugruha, a special enclosure for construction of the four Darus.The temple police would guard the Darugruha round the clock.As per the Nabakalebara manual the Patimahapatra would offer Bhog every day to the Daru till the construction begins.The construction of images of the deities would begin after arrival of the remaining three Darus in the enclosure.Fourteen Banajagi Daitapatis led by the Nabakishore Patimahapatra conducted the march from Gadakantunia to Puri covering a distance of about 52 km.while other Banajagi Daitapatis moved for Sarala temple to collect the Daru of Balabhadra.Most part of their march was on the Bhubaneswar-Puri national high way from Uttara square connecting Balakati.On the way, the villagers welcomed the Daru and offered prayers.They too participated in the pulling of Sagadi.Adequate police arrangements were made during the journey, while the temple administration made provisions for their stay.