Modi assures all assistance to Nepal 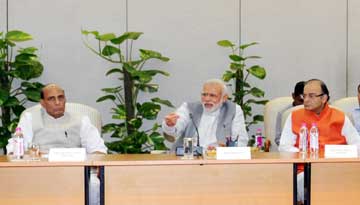 Odisha Channel Bureau New Delhi, April 25: Prime Minister Narendra Modi chaired a high-level meeting today, to review the situation following the major earthquake in Nepal.He directed immediate dispatch of relief and rescue teams, including medical teams to Nepal, as well as to affected areas in India.Modi, who was briefed on the inputs regarding the extent of damage to life and property received from various places in India and Nepal, assured Nepal of all assistance in dealing with the aftermath of the earthquake.He also directed that proper arrangements be made for rendering assistance in evacuation of stranded tourists.Modi was informed that the first set of NDRF teams is expected to reach Kathmandu today itself.The meeting was attended by Union Ministers Arun Jaitley and Rajnath Singh, National Security Advisor Ajit Doval and senior officials from the Government, IMD, and NDRF.At least 450 people have been killed by the earthquake in Nepal, according to reports.Prime Minister had earlier spoken to the President and Prime Minister of Nepal, and the Chief Ministers of the States of Uttar Pradesh, Bihar, West Bengal, Sikkim and Madhya Pradesh.