Channel war hots up in Odisha 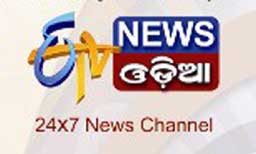 Odisha Channel Bureau
Bhubaneswar, May 4: At a time when television penetration in rural Odisha was increasing by the day, more and more television channels are being launched in the State in the recent months. Few weeks after Odia news channel Kalinga TV was launched in Odisha, yet another 24×7 news channel, ETV News Odia was launched by ETV News Network here today.

ETV News Odia, with `News is Life’ as its tagline, was formally launched at a function. Odisha Chief Minister Naveen Patnaik was present as Chief Guest on the occasion. Union Minister for Petroleum and Natural Gas Dharmendra Pradhan presided over the opening ceremony.

Meanwhile, the competition among the news channels is growing by the day with many of them launching outdoor advertising campaigns in a big way. Though it is content that is likely to be the sole differentiator, the news channel are introducing new programmes, talk shows, and hiring journalists from other channels and newspapers in order to increase their television rating points (TRPs) to attract more and more advertisers.