Raghu Dixit Project urges fans to Say No to Zoos 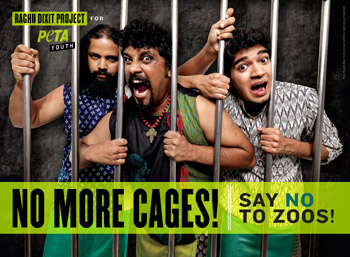 Odisha Channel Bureau Bangalore, June 20: Peering solemnly into the camera through the bars of a cage in which they have been locked, Raghu Dixit, Gaurav Vaz and Parth Chandiramani, the members of the acclaimed contemporary folk music group the Raghu Dixit Project, star in a brand-new ad for People for the Ethical Treatment of Animals (PETA) Youth – PETA India’s division for teens and 20-somethings – against the imprisonment of animals in zoos just in time for World Music Day (which is on June 21).The caption reads, “No More Cages! Say No to Zoos!” The Raghu Dixit Project wants people to know that animals suffer immensely when they are locked in cages and tiny exhibits at zoos.The ad was shot by leading photographer Waseem Khan, the outfit styling was by Ashwini Sashidhar, and hair and make-up were done by Hitesh Naik.The band also sat down with PETA for an exclusive video interview to talk about the cruelty in zoos and circuses, according to an official release issued by PETA in Bangalore on Saturday.“Zoos … are a way of extreme cruelty for animals,” Dixit says.”We urge … every citizen of India, ‘Stop promoting cruelty towards animals by going to …zoos’.Animals have their life of their own.They have their own emotions.It’s just that they can’t speak for themselves.So here as a band, we are speaking for them.Please stop going to zoos …where animals are treated very cruelly.”Denied everything that is natural and important to them, animals in zoos often express their frustration and loneliness through obsessive, repetitive and even self-destructive behaviour, such as pacing, head-bobbing and self-mutilation.Lions and other big cats have 18,000 times less space in zoos than in the wild, and that figure rises to one million times less space for captive polar bears.PETA’s extensive undercover investigations into zoos across India have found appalling neglect, decrepit facilities and animal suffering on a massive scale.The band joins a growing list of musicians and other celebrities – including sitar player Anoushka Shankar, actor Rahul Khanna, cricketers Wayne Parnell and Pragyan Ojha and badminton champion Jwala Gutta – who have teamed up with PETA to speak out against the cruelty of zoos.