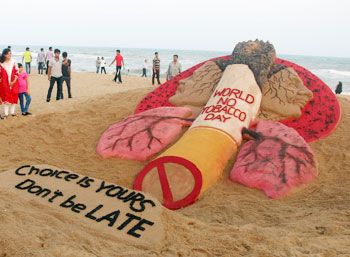 Odisha Channel Bureau
Puri, May 31: Internationally renowned sand artist Sudarsan Pattnaik has created a sand sculpture on Puri beach to raise awareness against smoking on the eve of the World No Tobacco Day.

The artist created a sculpture with the message “Choice is Yours, Don’t be Late” to create awareness among the people and to show that how dangerous is tobacco which spoils a human life.May 31 was designated as World No Tobacco Day (WNTD) by the World Health Organisation (WHO) in 1987 to give the importance to the fight against the tobacco epidemic, and to reduce the preventable death and diseases caused by its consumption. Pattnaik has been spreading awareness against use of tobacco for more than 10 years around the world through his sand art.

A large number of people gathered to see the sculpture on the Puri beach today.He has used 5 tonnes of sand along with some coloured sand and took five hours to create the 6ft high sand sculpture.

Students of his sand art institute join hands with him.Pattnaik has so far participated in more than 50 international sand sculpture championships across the world and won many awards for the country.