Odisha Channel Bureau Hinjilicut (Ganjam), June 7: In a classic case of neglect of old parents by their sons, an 84-year-old woman is in distress situation in Bellegam village under Hinjilicut area that comes under Chief Minister Naveen Patnaik’s constituency. 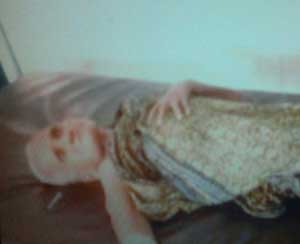 The woman’s miseries have been multiplied as she is physically challenged and is unable to run from pillar to post to avail benefits under the social security measures of the State Government.Added to this she has also not been covered under the old age pension scheme and thereby getting no government help in any manner.Her plight started after distribution of all her property among her four sons.She is now living alone in her house where there is no electricity or water facility.With all hers sons not looking after her, the woman’s daughter who is married comes forward to provide medical help to her at times.In such a situation, instead of discharging their duties towards their physically challenged old mother, the four brothers are reportedly scolding their sister and threatening to kill her and her husband,In dire need of justice, the old woman had gone to Hinjili police station three days ago, but instead of providing any help, the police reportedly asked her to bring all the documents as proof of her right over family property or the copy of the agreement that was reached during distribution of family property among her sons.Unfortunately, she does not either have any document with her or agreement paper with the terms and conditions made at the time of property distribution because her sons have taken possession of all the documents.In fact, she is not the only woman suffering like this.There are many old parents who are suffering in Ganjam, according to the villagers.