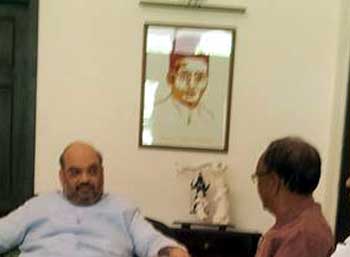 Odisha Channel Bureau New Delhi, June 12: Former Odisha Chief Minister Giridhar Gamang joined the Bharatiya Janata Party after he met BJP president Amit Shah here today.The 72-year-old tribal leader from Odisha, who quit the Congress on May 30, said he decided to join the BJP as he liked its political strategy.“I met the Amit Shah today and made my plea which has been accepted by the party leadership,” Gamang said after an hour-long meeting with Shah at the latter’s residence.Union Ministers from Odisha Jual Oram, Dharmendra Pradhan, besides BJP’s Odisha In-Charge Arun Singh and Gamang’s son Shishir Gamang were present during the meeting.The BJP will benefit in a big way in Odisha by Gamang’s joining, Pradhan told reports here.Though the process of Gamang’s joining the BJP was complete after his meeting with Shah, the tribal leader from Koraput will be formally welcomed into the party fold at a grand rally to be organised by the Odisha unit of the saffron party.The date of the meeting will be decided by the BJP Odisha unit soon, party sources said.