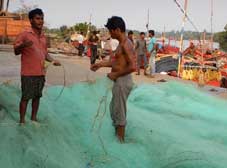 In a move to ensure the safe and hassle-free breeding of sea fish, Odisha government had earlier clamped two-month-long prohibition on marine fishing operation.The prohibitory order which remained in force from April 15 was lifted yesterday night.The fishing prohibition in view of breeding season of fish earlier lasted for 45 days.However, it had been extended to 60 days this year as per order issued by union agriculture ministry.The 60-day fishing ban was enforced simultaneously in West Bengal, Telangana, and Andhra Pradesh on eastern coast, said officials.Fishing vessels carrying the crews have reappeared along the seawater, marking the beginning of seasonal fishing trade.“We are geared up to recommence the fishing voyage.Everybody is optimistic of making up the loss due to the fishing ban.We are hardworking people.We are ready to fight adverse sea condition to get higher fish catch,” remarked Soumen Manna, a seagoing fisherman.The annual fishing ban had been enforced for the larger interest of those living on fishing activity.The restriction on fishing is imposed every year to allow breeding and multiplication of fish population.Thus, it is aimed at greater interest for the fishermen as it leads to the larger yield.It remained in force from April 15 to June 14.The fishermen and trawl operators had been asked not to undertake fishing voyage.Prohibition on sea fishing was promulgated under Odisha Marine Fishing Regulation Act, said Pratap Ranajn Rout, Deputy Director (Marine Fisheries).