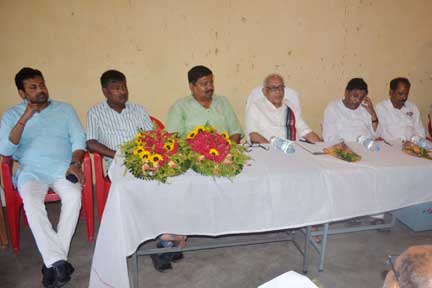 Briefing reporters here, Mishra charged that khaki-clad men in Kendrapara are acting as BJD agents, while Superintendent of Police is acting as if he is the party president.To bring home the point, Mishra said Rajkanika block congress unit president Baburam Jena was summoned by SP on May 29 in connection with March 8 Namtara violence during the anti-liquor campaign.Though Jena had obtained anticipatory bail from High Court, he was arrested and falsely implicated.SP inflicted physical and mental torture before he was remanded to judicial custody.“Rule of law does not prevail in Kendrapara.Behaviour of police is detestable.I met Jena in jail today.As he told me, SP badly beat him up and warned him to quit Congress or face dire consequence,” Mishra alleged.“CRPF Director General Prakash Mishra has already unmasked the true face of Chief Minister Naveen Patnaik and the ruling BJD by stating that vigilance case was slapped against him for opposing the money bag politics during last Lok Sabha and Assembly polls.The politicisation of police machinery in Kendrapara has added another feather to the inglorious cap of law-enforcing agencies,” he observed.Upright police officers are being meted out raw deal and are being unceremoniously shunted out to make the way for pliable corrupt officers, alleged Mishra, while adding that Prakash Mishra’s ouster from the police DGP post corroborates the point. Police have unleashed terror in the village.Bowing to diktat from ruling BJD strongmen, police have taken to coercive ploy in falsely arresting innocent people owing allegiance to congress party. Police had unleashed worst form of brutality upon people including women and children.Without any prior provocation, police had fired at the people indiscriminately.At least seven people including two teenage girls and 3 women had sustained bullet injury.However, guilty policemen have been shielded and no legal action is initiated against them, alleged Aul MLA Debendra Sharma.The sequence of events since the March 8 violence in Namtara insinuates towards the hard facts that policemen are acting as agents of ruling BJD.The local police station has turned into BJD office.The ruling BJD is enacting the saga of vendetta on political opponents with overt support of ‘politicised’ law-enforcing agencies, he added.