Odisha Channel Bureau Kendrapara, July 5: The 28-year-old son of a BPL farmer from a remote village in Odisha’s Kendrapara district has cracked the coveted civil services examination.Poverty did not deter Hrudaya Kumar Das from achieving his hallowed goal.Das was not backed up by Convent and English Medium school education.However, perseverance and handwork paid dividends with Das tasting success in his third attempt in civil services examination. 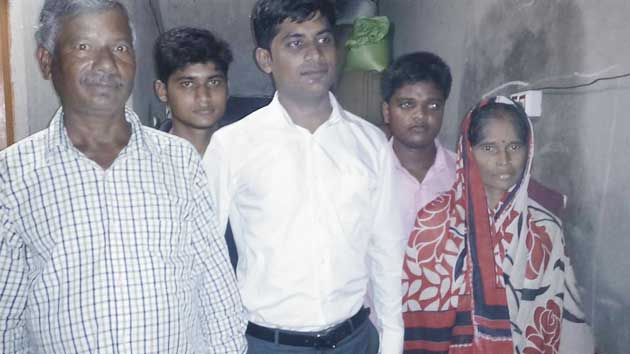 “I feel proud being son of a hardworking farmer.We own 1.5 acre of irrigated farmland.My father still toils in the crop fields to support the family.He had to dispose patch of land to meet with study expenses.My younger brother Rashmi Ranjan is presently studying MBA,” Hrudaya told with a tinge of emotion.“In primary and high school level, I excelled in studies.However, in Plus Two science, I passed out in second class.That was a setback which I could hardly digest.I was good in cricket.I had represented Kendrapara district team in Kalahandi cup inter-district cricket tournament.I was caught in dilemma whether to concentrate in cricket or studies.But my father advised me for higher studies.Later, I studied 5-year integrated MCA in Utkal University.Since then I never looked back.”“Much before the civil service success, I was posted in Jajpur district as Prime Minster Rural Development Fellow (PMRDF).My job was to interact with tribals in naxalite-infested areas and oversee the implementation of poverty alleviation and welfare programmes in backward areas.The union rural development ministry was paying me a hefty salary for the job assigned to me.Last month, I have got the appointment letter for an Assistant Commandant post in the Central Reserve Police Force,” he said.“My higher study stint in Utkal University motivated me to try out for civil services.Intensive subject-wise study helped me a lot.”“I am of the view that sincere labour never goes unpaid.By dint of determination and will power, I had set the civil service target.But for the family support, my civil service dream could never have been realised,” he added.