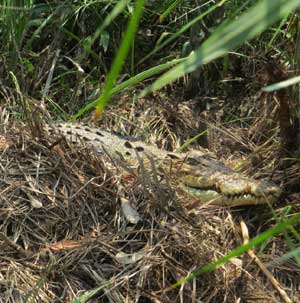 Odisha Channel Bureau Kendrapara, July 10: Wildlife personnel in Bhitarkanika National Park have spotted around 68 nesting sites of estuarine crocodiles as the annual breeding ritual of these reptiles has reached its peak stage.The number of nesting spots sighted in Bhitarkanika has gone up in comparison to last year when 62 crocodile nests were spotted.While 66 nests were spotted within the core area of the national park, two sites were found in Ramachandi creek under Mahakalpada forest range outside the park territory. The nests were sighted by wildlife enumerators of the forest department along the innumerable nullahs, creeks and water-inlets in the Bhitarkanika river system, an ideal habitat saltwater crocodiles.Female crocodiles lay 50 to 60 eggs and the hatchlings usually emerge from the nests after 70 to 80 days of incubation period.Forest department officials said due care has been taken this time by wildlife staff so that crocodiles’ eggs may are devoured by predators like snakes, jackals and dogs, found in the reserve.Adequate conservation measures by the state forest department have led to a systematic rise in the number of these reptiles over the years, claimed officials.The number of salt water crocodiles, the species which are not found in any other river system in Odisha, as per the latest census, in Bhitarkanika wildlife sanctuary stood at 1644.The wildlife sanctuary has remained out of bounds for tourists and visitors to ensure disturbance-free annual nesting of crocs.Besides, the animals turn violent and restive over human interference in their habitats.The enforced restriction on entry to sanctuary was clamped on 31 May and it would be lifted on July 31, said officials.“The population increase of these species has been at a snail’s pace.Its growth is getting stabilized and is also getting stagnated,” said Divisional Forest Officer, Rajnagar Mangrove (Wildlife) Forest Division, Bimal Prasanna Acharya.Nowhere in the country, are these species spotted in such abundance.Wildlife researchers studying on salt water crocs are of the view that habitat of these species is getting squeezed in about 26 square km of water bodies within the national park.These reptiles prefer the ideal water bodies because of its salinity contents.The salinity level in some of the water bodies might be dropping proving less ideal for crocodiles.It should be intensely studied to ascertain whether desalinized water has anything to do with re-productivity of these sensitive species, according to wildlife researchers.