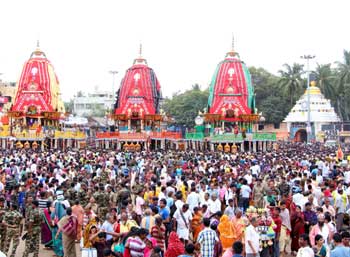 Rajkumar MohantyPuri, July 19: Lakhs of devotees pulled Darpadalan of Devi Subhadra and Nandighosha of Lord Jagannath to its destination and parked the two chariots in front of the Gundicha temple here today.The sky was thick over cast.The drizzling made the weather cool and it was conducive for the festival.On Saturday, pulling of two chariots were suspended by the administration at night fall while of the three only Taladhwaja of Balabhadra had reached Gundicha temple.At 9 am on Sunday several Keertan groups chanting holy hymns and dancing Bhaktas led the pulling procession of the deities.The Ghantuas were also beating their traditional tunes on board the chariots, while Dahukas (charioteers) were energising the devotees with their satires.Darpadalan of Devi Subhadra was pulled from Badasankha area followed by Nandighosha from Balagandi square to Gundicha temple.It took two hours to complete the pulling.Tight security arrangements were in place.Devotees were peeved over the chariot pulling rope arrangements on Saturday.There was not enough length of pulling ropes available for the devotees to pull as the major part of ropes were covered inside the extended security cordon.It had slowed down the speed of the first chariot Taladhwaja of Balabhadra which effected pulling of other two chariots for lack of road clearance, opined Kasinath, who was earlier associated with the chariot pulling arrangements. However, Nilakantha a devotee and senior servitor of the deities said it was the “Leela” of Lord Jagannath who arranged the situation such a way and made a night halt on the halfway so that his Bhaktas who could not reach Puri to participate in his Yatra on Saturday could pull the chariots on Sunday.The deities would spend Sunday night on the chariots where the rituals would be observed by the servitors.As per the festival schedule, the deities would be escorted in Goti Pahandi into the sanctum sanctorum of Gundicha temple on Monday evening.Meanwhile, the two women devotees who lost their lives during stampede on Saturday were identified.They were Susila Samantray (70) wife of Daitari Samantray of Barapada village under the Pattamundai police station limits of Kendrapada district, and Nirmala Baral (50) wife of Seshadhar Baral of Madhyakhand under Sarankul police station limits of Nayagarh district.The one died in sea by drowning while taking holy dip is identified as Sunanda Rout 35 of Kendujhar.After postmortem, their family members were handed over the bodies on Sunday.Six devotees injured in the stampede shifted from Puri hospital on Saturday night to SCB Medical College and Hospital at Cuttack were in critical condition.It is learnt that four of them including a lady were admitted into the ICU while one injured male among them is yet to be identified.