ECoR gears up to deal with flood situation

Odisha Channel Bureau Bhubaneswar, July 29: In order to minimise the effects of heavy rain fall and to improve safety of running trains including disruption free services, East Coast Railway has planned precautionary steps before the onset of the monsoon.General Manager of East Coast Railway Rajiv Vishnoi has directed the concerned officials to be on full alert towards any incident caused by monsoon rain and flood situation near railway track for the safety of passengers and smooth train operations. 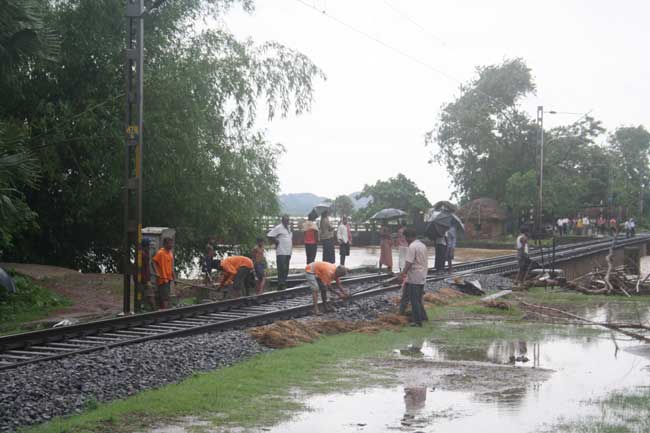 Accordingly, all precautionary measures have been taken prior to onset of monsoon.The catch water drains and side drains have been cleared of silt, vegetation and other obstructions to ensure free flow of rain water.The water ways of bridges have been cleared of vegetation and other obstructions, according to an official release issued today.Meetings have been conducted with State Irrigation Dept Officials for proper maintenance of railway-affecting tanks and works.Protective and river training works have been maintained in good condition and repairs carried out wherever necessary.Full Supply Level (FSL) in the case of canals and Danger Level (DL) in case of bridges have been painted with bright red band across each pier adjacent to the abutment so as to be clearly visible to the Patrolman, Stationery Watchman and Drivers.Arrangements have also been made not to allow water to stagnate on the track.In station yards, the cross drains and longitudinal drains have been cleared/provided to proper grades.Patrolling of railway tracks by Patrolmen has been planned during monsoon.They observe danger or interruption if any and protect the trains and travelling passengers from any unusual occurrence.Stationery Patrolmen and Watchmen have been deployed at vulnerable locations.Mobile Patrolmen have been deployed in vulnerable sections.Instructions have been issued that whenever there is heavy rain, the sectional Gangmen will organise patrolling of track on their own in their beat to make sure that the track is safe for passage of trains and ensure protection at all locations where washouts/slips are likely to occur.Arrangements have been made to stock sufficient quantities of monsoon reserve materials viz boulders, sand, cinder, quarry dust, ballast at identified locations.The Engineering relief vans and their equipments are kept ready.The CC cribs and relieving girders are kept in readiness so that they can be moved as per requirement.ECoR is in constant touch with India Meteorological Department and on getting weather alerts, proper mobilization is being done to meet the situations.Officers, Supervisors and staff are kept on alert for attending to the monsoon emergencies.East Coast Railway Control Office, which works round the clock, is keeping close liaison with Meteorological Department, Disaster Management Cell and staff deputed at flood prone areas for continuous monitoring and constant updates, the release said.