Odisha Channel Bureau Bhubaneswar, July 31: Semtech Corporation, with headquarters in California, going through its expansion plan in India has inaugurated a newly built state of the art design centre and office at Fortune Towers here today.Semtech, founded in 1960 and publicly traded since 1967, is listed on the NASDAQ Global Select Market under the symbol SMTC and has more than 25 sales and application support offices in 14 countries as well as representatives and distribution support locations in more than 30 countries. 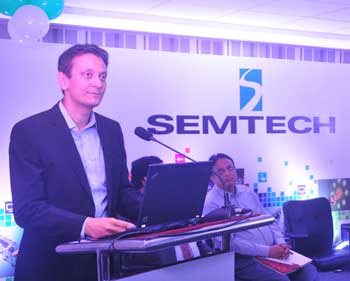 “Semtech is significantly looking forward to expand its Indian presence.With this phase of expansion and increasing capacity the company has inaugurated a new design centre here,” Roger Levinson, Vice President, System Innovation Group, Semtech Corporation, said while inaugurating the new centre of the company.Adding to the company’s aim in Odisha, Levinson added that the company is very keen to be a technological partner in the ensuing Bhubaneswar smart city project as the company has an aim to invest Rs.100 crore in the coming years.With the availability of a large trained resource pool in eastern India, renowned universities, good infrastructure and a very supportive government, Bhubaneswar provides a unique combination of advantages amongst the Tier II cities in India for Semtech.Semtech’s presence in Bhubaneswar will act as a catalyst for the growth of VLSI/Semiconductor industry and create an ecosystem of high end engineering in Odisha, he added. Speaking on the occasion, Senior Director of Semtech Corporation Niraj Mathur said that “India remains a key component of our business growth plans and this significant expansion of our facility is affirmation of the value Semtech sees in Odisha and India.The company has aimed to two third its human resource capacity in Odisha and it has targeted to recruit from Odisha and as well as from Eastern zone of India.”Over the last 2 years we have added extensive advanced semiconductor development capabilities to our Bhubaneswar engineering team and have also initiated an IT group.The team has established itself as a center of excellence by driving world-class innovation in electronics,” added Mathur.“The new world class facility at Fortune Towers will facilitate addition of new functional capabilities and attract new talent, resulting in high value employment opportunities and rapid expansion in Bhubaneswar.Currently the R&D team in Bhubaneswar is involved in bleeding edge VLSI Design, Embedded Systems Design, SAP development and Global IT support.Semtech plans to expand the scope of its capabilities in Bhubaneswar in the near future,” said Satyajit Mahapatra, Director, Semtech.Erstwhile Gennum Corporation (acquired by Semtech in March 2012), which has been operating in the city since 2008, provided a firm base for Semtech to establish a Research and Development Centre for India at Bhubaneswar.According to a press release, Semtech is a leading manufacturer of analog and mixed-signal semiconductor platforms for high-end consumer, computing, communications and industrial applications.Semtech’s vision is to be the global leader in analog and mixed-signal electronics platforms enabling architectural and performance differentiation.