Odisha Channel Bureau Kendrapara, Aug 6: Tension continues be tense at the self-proclaimed godman Sarathi Baba’s ashram on the outskirts of the township, while Kendrapara witnessed road blocks and dharnas by various protest in protest against the godman’s alleged escapades during the day today.Students of various colleges seeking arrest of the fake godman staged road blockade paralysing vehicular traffic on the busy Cuttack-Chandbali state highway.Hundreds of vehicles were stranded for two hours following students’ stir. 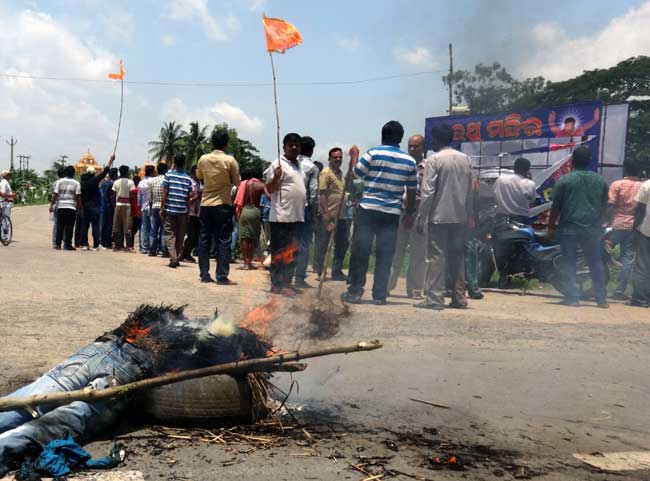 As the situation in aftermath of expose of Sarathi’s alleged escapades has turned surcharged, police are keeping close watch on the situation to thwart possible breach of order. Agitated people have congregated near the Ashram.As there is every possibility of crowd turning into mob to take law unto their hands, armed police deployed at the site have cordoned the ashram.A section of crowd was trying to barge into the ashram while others were trying to pelt stones towards the ashram campus.However, police have dispersed the crowd and averted breach of peace, said police officials.BJP and left parties CPI(M), CPI staged dharna and petitioned the district collector and sought for the arrest of the fake guru under NSA.They also sought for judicial inquiry into the godman’s alleged misdeeds and accumulation of huge funds and property.Women rights outfits also rose in protest demanding the godman’s immediate arrest. The fake Baba was overtly enjoying governmental and political patronage.The tourism department in an act of according approval to Baba’s spiritual powers had put up boards near the Ashram.A house committee of Odisha Assembly comprising seven sitting MLAs had made it a point to visit the ashram last year and had sought blessings of the Baba.The fake godman flourished only because of the patronage of many ruling BJD leaders.“There should be a thorough and impartial inquiry into the state of affairs of the Baba and his ashram.I have submitted a representation with the district Collector in this regard,” said Aul MLA Debendra Sharma.Kendrapara Collector Debraj Senapati said “MLA Mr.Sharma’s complaint has been forwarded to SP for a probe”.Sarathi as it was alleged by media reports stayed at hotel in Hyderabad from July 3 to 6 July with a woman whom he had posed as his spouse.“Police are investigating into the matter.Legal action would be initiated if prima facie evidence is found against the Baba,” said Kendrapara SP Satish Gajbhiye.