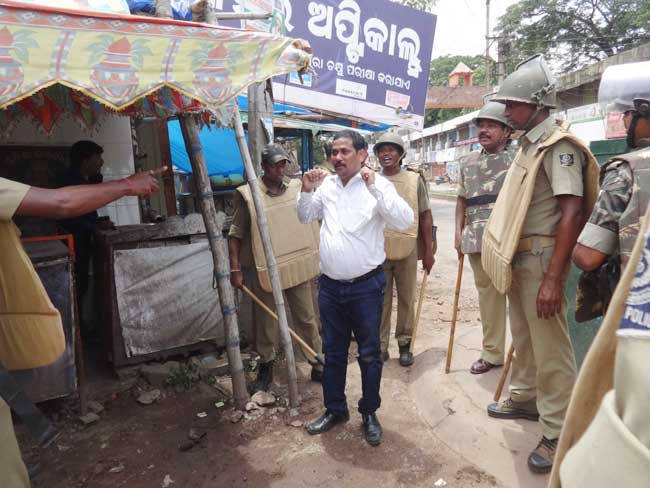 The scenes that were witnessed later reminded one of the spectres of hostility often seen in civil war zones in many countries.Khaki-clad police personnel retaliated by pelting stones at protesters.Innocent people who had nothing to do with the agitation were caned mercilessly.There are reports of people being dragged by policemen and beaten up indiscriminately.They did not spare college and school students and those who were staying indoors, recounted eyewitness accounts.In a related development, a four-member team of investigators from crime branch wing of state police today began probe into the alleged escapades and money-laundering by the self-styled godman Sarathi Baba alias Santosh Raul.The turn of events that are still unfolding in the aftermath of alleged excesses of the godman got further surcharged today with delegations of Pradesh Congress Committee and state BJP unit rushing to Kendrapara to assess the situation in violence-ridden town.PPC president Prasad Harichandan demanded the immediate arrest of Baba and a thorough probe into all nefarious activities of the Baba including his alleged political link with ruling BJD’s bigwigs.BJP leader Bijoy Mohapatra sought for the sealing of the ashram founded by the Baba.The Crime Branch probe ought to delve deep into the alleged involvement of influential people including politicians, Bureau crats, police officers and industrialists, he added. 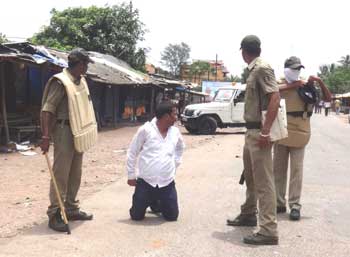 Curfew-like scene prevailed in the bustling district headquarters township with a visibly worried administration clamping prohibitory orders under Section 144 of CrPC, curtailing public movement within the municipality and adjoining suburbs.The alleged police action against the protesters, who were staging a road blockade at Tinimuhani junction demanding arrest of the tainted godman, has evoked widespread condemnation from various quarters.Keeping in view the growing public anger against khaki-clad policemen, the state government in an apparent damage-control exercise later removed Gajbhiye.“Never before have we seen such barbaric and uncivilized behavior on part of policemen.Activists of the BJP youth wing were peacefully blocking the road at around 9.30 am to register their protest against police inaction against the tainted godman.All on a sudden the policemen went berserk and beat up the protesters without prior provocation.Later all hell broke loose as locals spontaneously rose and joined the ABVP activists.It led to heavy brick-bating.Things took violent turn.Highhandedness on part of police forces led by the SP turned normal situation to abnormal proportion,” commented an elder citizen Bhagaban Jena.