Odisha Channel Bureau Jashipur (Odisha), Aug 21: With the pioneering efforts of Mayurbhanj district in enumerating homesteadless single women, 648 single women have got land at Jashipur tehsil.With this, Mayurbhanj district has distributed a total of 1172 pattas to single dispossessed women including widowed, divorcee, abandoned, destitute and never-married through the Women Support Centre programme implemented in the district with support from Landesa, a global non-profit working for securing land rights for the poorest people. 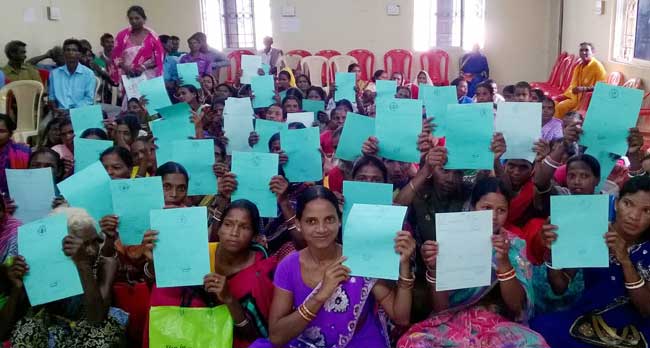 Efforts are on to include these women in various livelihood and social security programmes, according to Landesa.Despite Odisha government’s pioneering efforts to provide land to the landless, land rights of women, particularly single women, have remained an area of critical concern needing focused attention.Since the state’s land settlement Acts mandate that only a homesteadless ‘family’ is eligible to get land from government’s land programmes, single women are mostly excluded in the enumeration process.While woman-headed households are counted as a ‘family’; single women living with parents or relatives are not counted.Their land rights are subsumed within the rights of the overarching family and these women are not considered eligible to get land.The Women Support centre programme has introduced a robust ‘participatory women-focused enumeration method’ to count the ‘invisible’ single women as ‘family units’.“Women Support Centre programme is an empowering institutional mechanism where community support is in-built in the process of identifying women and securing their land and livelihood so that they can lead a dignified life.Anganwadi workers have been playing a crucial role in tracing the single women in the villages by door-to-door survey,” said Rajesh P.Patil, Collector and District Magistrate, Mayurbhanj.“Besides, the revenue officials have been orientated through a series of training programmes to prioritise the cases of single women.Computerised Management Information System (MIS) has been introduced to create tehsil-wise data base of all single women.Unique Access Codes have been assigned to the tehsil and block office for accessing soft-data to process land and social security entitlements respectively,” he added.A recent World Bank study on Gender Inclusive Land Governance in Odisha claims that 3.3% of land is owned by women.Besides, as high as 54 % (46, 61, 262) rural households in Odisha are landless, 43.35 % derive a major part of their income from manual causal labour and there are 10.6 lakh woman-headed households (SECC, 2011).There is no official data available about number of single women without homestead in the state.Women Support Centre programme is successfully operating in four districts – Ganjam, Mayurbhanj, Koraput, and Kalahandi with 76 exclusive cells – one from each tehsil.As per survey by Anganwadi workers in these four districts, single women constitute 12% of total rural women population.Government of Odisha enacted the pioneering State Policy for Girls and Women 2014 which clearly mentions that government would allocate homestead land to single vulnerable women.Besides, the state has recently decided to enumerate all homesteadless based on the revised income ceiling of Rs.40,000 and allocate homestead land to them by October 31.However, unless the state adopts a standard ‘participatory women-focus enumeration method’ as used by the Women Support Centre programme model, the state’s on-going drive to enumerate the homesteadless is likely to miss the single women, experts say.