Odisha Channel Bureau Bhubaneswar, Aug 23: Students of the Xavier Institute of Management, Xavier University, Bhubaneswar organised a mass plantation and sapling donation drive called X-Pallavan in the city on Sunday.The drive was supported by the Bhubaneswar Municipal Corporation and Odisha State Forest Department apart from HDFC Bank.X-Pallavan was organised as prelude to ‘Xpressions’ which is Eastern India’s biggest B School festival organised by XIMB for last 17 years. 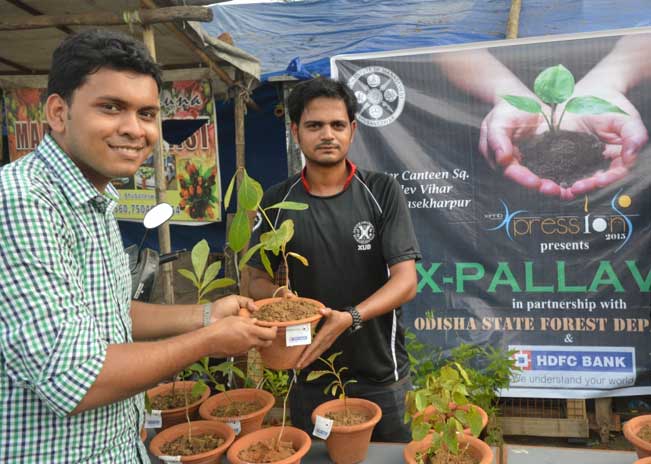 D.V.Ramana, Professor, XIMB, inaugurated the initiative in the morning.In his address to the students, he spoke about how important it is for us to have characteristics like a tree.”It’s not enough just to plant trees, it’s equally important to implant in ourselves the characters of a tree like to always grow and to help others,” he said.As part of X-Pallavan, a patch of wasteland near the Fortune Tower was developed and saplings were planted by the students in the morning.The patch of land was identified by the Bhubaneswar Municipal Corporation and the students will maintain the area in future.In the afternoon, the XIMB students took the initiative to different parts of the city.The event was organised at six locations in and around Bhubaneswar simultaneously.The locations were Master Canteen Square, Kalpana Square, CRPF Square, Vani Vihar Square, Jayadev Vihar and Chandrashekharpur.Kiosks were setup at these locations to distribute plant saplings to the public passing by.There was enthusiasm observed among the public who flocked these kiosks to get free saplings.General public, especially the youth seemed inspired and wanted to know more about the saplings which were being distributed.The common public appreciated the initiative by the young management students and believed that such initiatives would drive awareness and inspire people to plant more trees.The Xpressions Steering Committee planned and organised this event.”Xpressions is not just about cultural fiesta and celebrations.It’s more about celebrating the progress towards a better society.This is the message we want to spread through initiatives like X-Pallavan”, said a student organiser.There will be more such events with social message like Xathon, the XIMB Marathon, are lined up in the future.Xpressions 2015, the annual Management Cultural Festival of XIMB, will be held from November 13 to November 15.The programme was a huge success in the city because of the zeal and energy that the students had put in behind organizing this event.Hundreds of saplings were distributed to the general public, in order to create awareness among them and thereby take a step towards afforestation in and around Bhubaneswar.