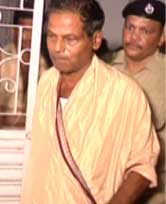 Odisha Channel Bureau Bhubaneswar, Sep 1: Crime Branch of Odisha police will now investigate into the wrongdoings of Surendra Mishra alias Sura Baba at his sprawling Trahi Achyuta Ashram on the outskirts of the city.Chief Minister Naveen Patnaik ordered for a Crime Branch probe into the cases against the controversial godman and his two sons after his government faced criticism from various quarters.While the police had never cared to look into the wrongdoings of fake godman Sura Baba at his sprawling ashram at Jhinti in Balipatna area near Bhubaneswar till date, the State government’s Tourism Department had granted the ashram the status of a place of tourist-interest in 2009.Sura Baba and his two sons were arrested by the Commissionerate Police on Monday after registration of three cases against the Baba and his associates.The Crime Branch will now take over the investigation from the Commissionerate police and probe into various aspects of the case, including the real estate business of Sura Baba and his sons at various places, including a place near Mumbai.Meanwhile, a local court remanded the Baba and his two sons to three days police custody.The three, who were lodged in Jharpada jail on Monday, will now be questioned by the Crime Branch for three days.While 13 platoons of police personnel have been deployed at Jhinti to save the ashram from the hands of the angry villagers, a team of police has also started probing into the various charges against the Baba, including sexual exploitation of women.The Baba, who maintained a lavish lifestyle, was popular among politicians belonging to different political parties.