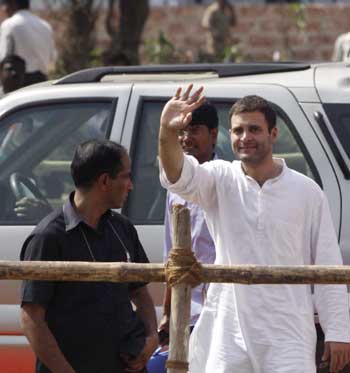 Odisha Channel Bureau Jharsuguda: Congress vice-president Rahul Gandhi began his two-day visit of Odisha from here today bringing cheer among the party workers and leaders of the State.Gandhi arrived at Jharsuguda airstrip flying in from New Delhi early in the morning.He is on a mission to Odisha primarily to highlight the plight of the farmers in the State.He was given a rousing welcome by party workers and leaders at Jharsuguda airstrip from where he left for Debahal in Bargarh district by car to lead a ‘Chasi Banchao Padyatra’ (save farmer march) in Bargarh district.Before leading the padyatra, the Congress vice-president is scheduled to meet the family members of the distressed farmers who have committed suicide in recent months.Ahead of Gandhi’s visit to the region, Sudam Mahajura, a young farmer of Belbahali village in Bargarh, allegedly committed suicide by consuming pesticide on Wednesday. During the padyatra from Debahal to Attabira, Gandhi would interact with displaced tribals, distressed farmers as well as students of Attabira College.Gandhi’s visit to western Odisha carries significance as most parts of the region sis heading towards drought-like situation due to erratic rainfall.Later in the day, the Congress vice-president would hold an interaction with intellectuals and eminent citizens of western Odisha and also interact with party leaders.He would spend the night at Ashok Nivas at Burla and leave for Cuttack by helicopter on Friday morning.He is scheduled to visit the Sishu Bhavan where more than 60 infants and children died within two weeks since August 20 due to poor infrastructure.After the Sishu Bhavan visit, Gandhi will attend a party meeting at the Congress Bhavan in Bhubaneswar, and also address party workers belonging to weaker sections of the society at Utkal Mandap in the Capital city.Gandhi is also scheduled to have separate meetings with a group of chit fund scam victims, social activists and leaders of civil society organizations and senior media persons of Bhubaneswar on Friday before leaving the State ending his two-day visit.