Odisha Channel Bureau Bhubaneswar: Siddharth Village Group has introduced a novel way of creating eco homes for homeless primitive tribes who are in the process of extinction.Over 20 of these primitive tribes are undergoing one month training on block brick making and masonry training conducted by THREAD, Siddharth Village at Kakirigumma in Koraput.It should be noted that out of the 62 tribal groups, there are 13 PVTGs namely Birhor, Mankidia, Bonda, Paraja, Didayi, Dongaria Kandha, Juang, Kharia, Kutia Kandha, Lanjia Saura, Lodha, Paudi Bhuyan, Saura and Chuktia-Bhunjia. 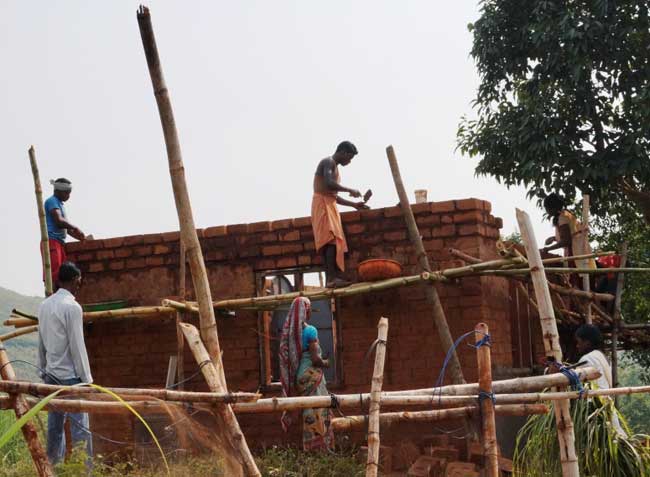 In Mayurbhanj district, Kharia and Mankidia are two major PVTGs living in foothills of Similipal bio-sphere and tiger reserve areas.They are being trained to make eco friendly block bricks made of major component mud and sand and a small portion of cement which need water curing for 21 days, according to a release.These men and women budding masons after the training are gifted with block making machine and all tools for construction to construct their own eco homes for themselves.John, founder of Siddharth Village group in India who spearheads eco-village movement in India particularly Odisha, said that though they are slow they are serious in learning.They are trained to be a mason, organic food cultivator to grow their own food and also earth fill construction besides block brick construction, he added.The housing for the primitive tribes is in deplorable state covered by sarees or leaves.They are prone to sickness and other issues as there is no sustainable house for them.Karmi Besra, the chief functionary of the project, Siddharth Village team states that we decided to create a model of eco village housing for at least fifty houses and lobby the state government to provide such houses for them through their welfare fund.It is also planned that the resources by government are directly given to the primitive tribes to construct their own housing.She further states that the block development officers encourage this initiative and agree to sanction money for each family to construct their own houses as against giving to any contractors doing the work for obvious reasons.John stated that it is heartening that primitive women becoming mason and empower themselves to construct their own eco friendly houses of simplistic luxury.The training will be completed on October 30 and they will return home with machine and equipments to construct their own houses and support and train other men and women to learn the skill.