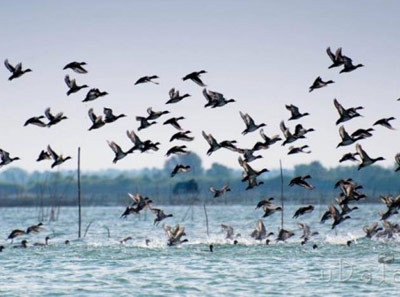 Chilika Wildlife Division has set up 17 camps in the lake along with regular patrolling by boats.During the last winter, around 7.19 lakh migratory birds of 158 species had reached this lagoon from northern cold regions of Europe and Asia.Lack of human interference, ideal climatic condition, cool breeze and congenial water-bodies all have emerged to the liking of these delicate chirpy winged species in both the wetland sites.The migrant feathered guests find their way to Chilika and Bhitarkanika from trans-Himalayan, Northern Eurasia, Caspian region, Siberia, Kazakh, Lake Baikal and remote areas of Russia.Migratory birds have been spotted at Mangalajodi and Nalabana island that form parts of Chilika lake, the largest lagoon in India, said Bikash Ranjan Das, Divisional Forest Officer (Chilika Wildlife Division).Last winter, around 7.19 lakh birds of 158 species had visited the lake, while around 8.83 lakh birds of 167 species had their winter sojourn in the lagoon in 2012-13.To ensure the safety of migrant species, the forest department has initiated measures to ensure their safety.17 camps with 85 wildlife personnel have been set up at strategic sites where the birds are exposed to human interference, added the official.The marshy wetland spots in Bhitarkanika have become temporary habitats for migratory birds.Their arrival has been on lesser scale as temperature has not considerably dipped, it is expected that migration would pick up in mid-November.Their flight owes its origin to Central Asian region.Unable to cope with extreme cold in their original habitat, the feathered species prefer these congenial wetland spots, said Bimal Prasanna Acharya, Divisional Forest Officer of Rajnagar Mangrove (Wildlife) Forest Division.