N.Ram speaks on Where is the Media going?

Odisha Channel Bureau
Bhubaneswar: While raging debate on climate of intolerance is getting shriller by days with intellectuals from diverse fields expressing their concerns, media seem to be playing soft on the issue and acting like referee. Former Editor-in-Chief of The Hindu and veteran journalist N.Ram, who is very critical on media’s reaction, says news media and journalists en masse have not done justice to the gravity of the situation and have not risen full-throatedly to the challenge, in the way writers, film-makers, academic historians, and scientists have.

Apart from intolerance debate, he spoke about status and challenges of Indian media at great detail. Here is excerpt of Mr.Ram’s Pradyumna Kishore Bal Memorial Lecture 2015 delivered in Bhubaneswar on Sunday evening. 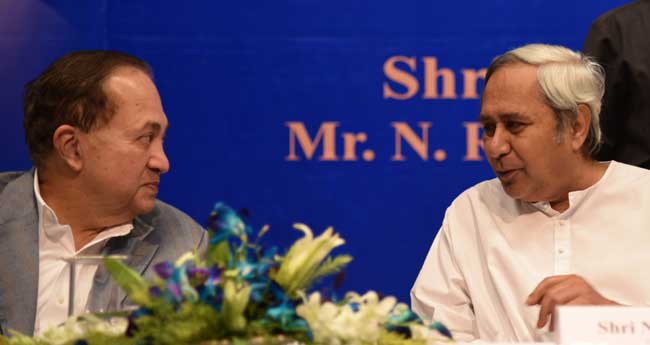 The following is the copy of N.Ram’s lecture: Pradyumna Kishore Bal Memorial Lecture 2015 Where are India’s news media going?

Differences of opinion are being sought to be settled by using physical violence. Arguments are met not with counter arguments but with bullets.When a poor man is suspected to have kept a food item that certain sections do not approve of, his fate is nothing short of death by lynching. At the launch of a book whose author happens to be from a country disapproved of by certain groups, the organiser is disfigured with ink thrown on his face.And when it is hoped that the Head of Government will make a statement about improving the prevailing conditions, he chooses to speak only about general poverty; and it takes the Head of the State to make the required reassuring statement, not once but twice.

When writer after writer is returning their award of recognition in protest, no comment is made about the conditions that caused the protest; instead the ministers call it a paper revolution and advise the writers to stop writing. This is as good as saying that intellectuals will be silenced if they protest.

Statement by 53 academic historians, October 2015
The crescendo of voices against the assaults on free speech, reason, and the scientific temper are gathering mass, getting louder, and being heard from all over India. Writers, film-makers, academic historians, scientists and other intellectuals are speaking up, protesting spiritedly in various ways, as we have not witnessed for a long time.And there is not a shred of doubt in anyone’s mind about who the assailants are.

The Sangh Parivar’s fingerprints are there behind virtually every assault during the period the Narendra Modi government has been in office. Arun Shourie, no less, has confirmed this and, what is more, he has certified the protests as righteous, just, and ‘Gandhian’. But the problem goes beyond the speeches and acts of the Sangh Parivar. There are also structural factors, embedded in the constitutional-legal system, that play on the side of the intolerants. Once a climate of intolerance is created, and is bolstered by official silence, apathy, or apologetics bordering on collusion, it is open season on targets at various levels.

It is open season on anyone whose writings, speeches, ideas, opinions, views, actions, and creative work a group can claim to be ‘offensive’ to its sensibilities.Under such circumstances, the constitutional guarantee of “freedom of speech and expression” becomes a nullity.And how have the mainstream news media responded to rising and spreading intolerance? To be fair, they have given some space to the various statements of protest.Newspapers in various languages have written editorials, for the most part, cautious, against intolerance and in defence of free speech.

News television channels have fielded debates on the subject, with the anchors usually playing neutral umpire, adopting the posture that much can be said on both sides. But have India’s news media and journalists done justice to the gravity of the situation, risen to the challenge, as they did, for example, in 1988, against the Rajiv Gandhi government’s infamous Defamation Bill? You may have your own impressions here. But I would say the news media and journalists en masse have not done justice to the gravity of the situation and have not risen full-throatedly to the challenge, in the way writers, film-makers, academic historians, and scientists have.