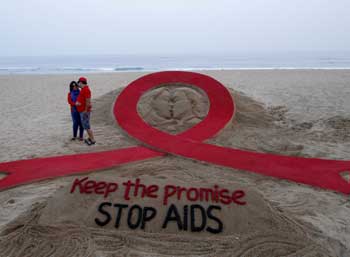 Odisha Channel Bureau KENDRAPARA: Notwithstanding claims both by government and non-government agencies, this coastal Odisha region is steadily coming under the vice-like grip of killer HIV/AIDS.Both the ground realities and statistical feedback pouring in from various sectors are ample indicators of the disturbing scenario.If official statistics are anything to go by, the district accounts for 596 HIV+ infected persons with 104 of them being full blown cases of AIDS.Since 2003, the killer disease has claimed 114 human lives including women and children.However, officials allayed fear while observing that the incidence of disease has been plugged from spreading its tentacles.“The blood samples of 11,014 persons from high-risk group have been tested.596 samples were found out to be carrying HIV/AIDS virus.Of the infected, 22 are children.Significantly 65% of the HIV/AIDS carriers are youths in the 25-35 age-group”, said Kendrapara Chief Medical Officer Binayak Prusty. The statistical graph of virus carriers is on a steady rise.The numbers of victims have almost doubled since past 2 and half-a-year.Though stigma and superstitious notions associated with the deadly disease petered out in recent years, the swelling numerical figure of virus carriers has been a cause of worry for health planners.“Though the number of HIV/AIDS carriers is on the rise, the scenario is not as disturbing as it is in some districts of southern Odisha.Those diagnosed carrying AIDS virus, none of them are found stigmatized carriers and are subjected to social ostracization.In the wake of greater and concerted campaign, greater public awareness has been generated”, CDMO observed.In this coastal district, HIV/AIDS is not an urban phenomenon.Majority of cases were diagnosed from rural areas, which witness migration of people to different states for employment. Fearing easy identification, the carriers were earlier shying away from receiving the government-sponsored Mandhbabu monthly pension scheme.But things have changed towards better now.As many as 288 HIV/AIDS carriers are recipients of pension while application for 53 infected persons awaits official sanction, he informed.It’s pertinent to note here that there is periodic annual exodus of skilled labour from this part of the state to country’s urban and industrial centers.Poverty and lack of employment opportunity triggers the labour migration.In the process, migrant labourers contract the virus in their workplaces and later transmit it to family members.As a matter of fact, over 75% of HIV carriers are migrant workers.This indeed is a disturbing trend that needs to be addressed to.“Superstitious mindset of people has changed a lot.During our visit to HIV/AIDS carriers’ home, we had come across quite distressing sights earlier.People used to keep safe distance from diseased men and women lest it may contract them.There were instances in the past when villagers skipped cremation and preferred to bury the dead lest the virus from the infected body may spread in the air.The virus carriers were found ostracized.The family members also bore the brunt of the disease with neighbours found keeping safe distance.Children had also fallen prey to this disturbing social scenario.But people have now realized that their misconception and there has been an attitudinal change towards the disease now”, described a Counsellor, Integrated Counselling and Testing Centre (ICTC) run by State AIDS Control Society.