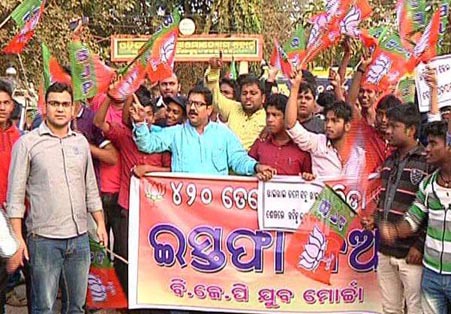 Odisha Channel Bureau Bhubaneswar: The Odisha Khadi and Village Industries Board has got embroiled in an unsavory controversy with its president facing charges of fiscal irregularities and embezzlement of board grants.The Board president Tajeswar Parida has been accused of bungling funds earmarked for development of Khadi units across the state.The corruption charges against Parida have grabbed the spotlight even as youth wing of Bharatiya Janata Party staged demonstration in front of the Khadi Board office at the State Capital on Friday and resorted to road blockade seeking ouster of the tainted Board chief. 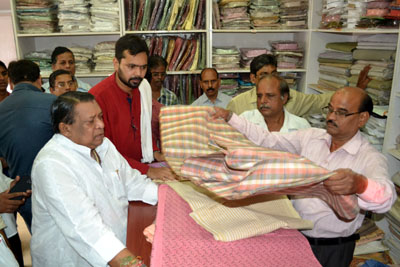 The agitating BJYM activists also pressed forth demand for initiation of criminal case of fraud and deceit against him.Parida who faced allegation of laundering an estimated Rs.100 crore board grants is widely believed to owe close proximity of third floor and enjoy overt blessings of Chief Minister Naveen Patnaik’s coterie.Parida was in the race for ruling BJD’s party ticket for politically-sensitive Patkura Assembly constituency.However, the party opted for veteran Bed Prakash Agarwalla at the eleventh hour.In political circles, it is believed that Parida acts as strategist for ruling BJD in the national capital region.Parida has made a mockery of Gandhian institution like Khadi Board, and a corrupt man like Parida is a complete misfit to head such an august institution, alleged BJYM chief Umakanta Pattnaik.The fund bungling is crystal clear.While Rs.5 crore worth Khadi has been woven in government initiative, Board chief Parida has used the institution as personal property by spending over Rs.100 crore in fraudulent manner.Corroborating the charge, BJYM chief Pattnaik alleged that Parida is drawing housing allowance from the government even though he stayed in his personal house in Bhubaneswar.He continues to draw huge sum of travelling allowance from the Khadi Board coffers while in reality he hardly traveled the areas as claimed by him through fictitious vouchers and bills, he added.To please his political mentors, Parida has brazenly diverted Khadi Board funds to BJD’s political rallies and programme, BJYM added.