Odisha Channel Bureau
Bhubaneswar: It was a magnificent show of wisdom at Pathani Samanta Planetarium, as school students, chosen after various levels of screening across Odisha, battled it out for the top slot at 9th edition of the Tata Steel Inter-School Quiz competition held here on Saturday. 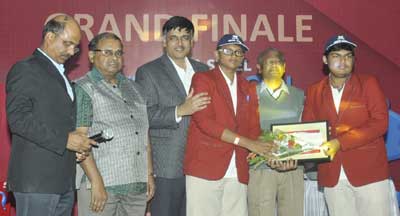 Finally, DAV Public School, Kalinganagar of Bhubaneswar represented by Aman Samal and Priyansh Priyadarshi stole the show and was declared as champion in the Tata Steel Inter-School Quiz Competition-2015.

Speaking on the occasion, Rajiv Kumar mentioned the event as an exhilarating experience and reaffirmed Tata Steel’s efforts towards grooming the young talents. More than 600 students from Schools across Odisha participated in the preliminary rounds of the 9th edition of Tata Steel Inter School Quiz which were conducted at Joda, Keonjhar, Jeypore, Berhampur, Bhubaneswar, Belpahar, Balasore and Jajpur Road in October and November 2015.The top 50 teams selected from the preliminary rounds participated in the semi-final round held at Bhubaneswar today and finally, six teams clashed in the finals.