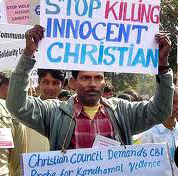 Odisha Channel Bureau Bhubaneswar: The Commission of Inquiry which conducted an inquiry into the anti-Christian riots in Kandhamal district of Odisha in 2008 submitted its final report to the State government here today.Though details of the Commission’s report have not been made public sources said that the Commission has suggested a series of measures to prevent communal riots in Kandhamal in the years to come. The one-man probe panel headed by retired Orissa High Court judge Justice A.S.Naidu submitted its 1026-page report in two volumes after hearing a total of 300 witnesses – 222 private witnesses and 78Secretary of the Commission A.K.Patnaik submitted the report to the State Home Secretary Asit Tripathy at the State Secretariat here.An interim report of the Commission was submitted to the government in July 2009 by Justice S.C.Mohapatra who headed the probe panel till his demise in 2012.The Commission was set up by the Naveen Patnaik Government in 2008.The then sitting BJP MLA Manoj Pradhan was sentenced to rigorous imprisonment for six years by a fast track court in September 2010 for a murder during the 2008 communal riots in Kandhamal.The murder of Vishwa Hindu Parishad leader Lakshmanananda Saraswati on the night of August 23, 2008 had triggered riots in Kandhamal.The Maoists had claimed that they had killed Lakshmanananda.The riots continued for several weeks claiming at least 38 lives.Thousands of houses belonging to Christians were burnt down and damaged during the riots.Several thousand Christian families had fled Kandhamal to save their lives.