Odisha Channel Bureau Bhubaneswar: Christmas, the birth of Lord Jesus Christ was celebrated across Odisha amid tight security at many places including communally sensitive Kandhamal district.Christmas celebrations began with pealing of bells in churches and chapels with midnight masses and display of fireworks lighting up the winter sky.The members of the Christian community as well as those belonging to other religions exchanged greetings to mark the occasion. 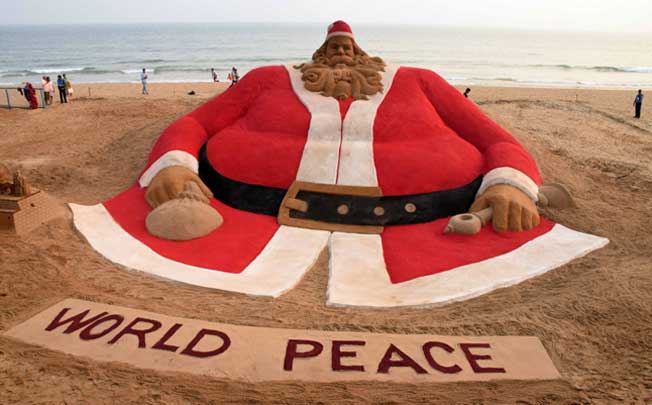 Tight security arrangements were made in Kandhamal in view of a day-long bandh called by the Kui Samaj Samanwaya Samiti to highlight various demands of the Kui speaking tribals.Hundreds of people were seen visiting the churches that have been decorated nicely on the occasion.Similar mood was witnessed in Bhubaneswar, Cuttack and other towns in the State.Renowned sand artist of Odisha Sudarsan Pattnaik created a 45ft high sand Santa Claus with message “World Peace” at Puri beach on Thursday.Pattnaik has requested Limca Book of World Records to place this record in their book.Pattnaik used about more than 1000 tonnes of sand with some coloured sand in the sculpture.He was assisted by 20 of his students at the Sudarsan Sand Art Institute of Puri.It took them 22 hours in two days to build up the mammoth structure, which will be on display till January 1.Pattnaik has also created Lord Jesus and Mother Mary.Pilgrims who are in the temple town during the on-going festive season are thronging the beach every day for a glimpse of the marvellous sand structure.