Odisha Channel Bureau Bhubaneswar: Even as enrollment in many journalism schools in Odisha has dropped in recent years, half of the students who have joined the newly established Odisha State Open University have enrolled themselves in the journalism course.The programmes offered by the University are Diplomas in Management, Computer Application, Cyber Security, Rural Development, and Journalism and Mass Communication along with a Certificate in Communication Skills. 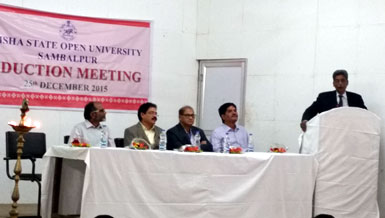 The university has enrolled a total of 227 students in the six courses it is offering in its opening year.As many as 113 students have joined the university’s diploma course in Journalism and Mass Communication.Of the remaining 114 students who have been enrolled are 64 in Rural Development, 16 in Certificate in Communication Skills, 15 in Cyber Security, 12 in Management and seven in Computer Application.The university was established by an Act of Government of Odisha this year to promote distance education systems in the educational pattern of the State.The induction meetings for the first batch students are in progress.The first induction meeting for the students belonging to Bargarh, Balangir, Boudh, Deogarh, Jharsuguda, Kalahandi, Nuapada, Sambalpur, Subarnapur and Sundargarh districts.The second induction meetings for the students belonging to Angul, Baleswar, Bhadrak, Cuttack, Jagatsinghpur, Jajpur, Keonjhar, Kandhamal, Kendrapara, Khurda, Mayurbhanj, Nayagarh, Puri, and West Singhbhum district in Jharkhand was held on December 25 at the BJB Autonomous College Bhubaneswar.The third induction meeting for the Ganjam, Koraput, Nabarangpur, Rayagada districts is scheduled to be held at S.B.R.Government (Autonomous) Women’s College, Berhampur on December 27.The students who have joined the Open University are being provided study materials and identity cards at these meeting.The university with its headquarters at Sambalpur is in the process of establishing Regional Centres and Study Centres in different parts of the State using the existing infrastructure of Government/Government Aided Colleges and other institutions, Officer on Special Duty (OSD) Dr.Srikanta Mohapatra said.