Odisha Channel Bureau Bhubaneswar: The decision of RSS prevailed over other aspirants and Basanta Kumar Panda was elected president of Odisha BJP here today.He will hold the post for a period of three years 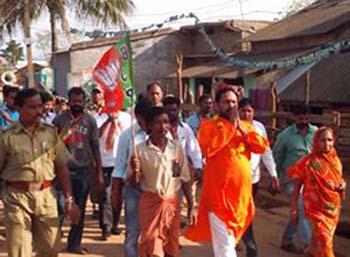 Fifty-four-year-old Panda, who represents Nuapada Assembly constituency in the State Assembly, replaces Kanak Vardhan Singh Deo.He was elected uncontested as he was the only leader to file nomination papers for the election at the party headquarters here with as many as 10 proposers.Panda, who is holding the post of BJP Legislature Party Leader, will vacate the same following his election as the State president of the party.Singh Deo is likely to replace Panda as Leader of BJP Legislature Party as a senior legislator.Among others who were expecting to be chosen as the new president include senior leader Bijoy Mohapatra and former legislator Pratap Sarangi.However, the RSS leaders and some senior party leaders wanted Panda to be unanimously chosen for the top post and their decision prevailed over other contenders.