Modi to arrive in Bhubaneswar tonight 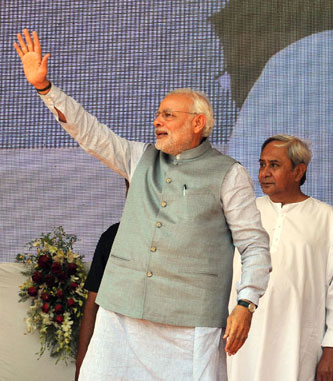 Odisha Channel Bureau Bhubaneswar: Prime Minister Narendra Modi, who is visiting Odisha to dedicate various projects to the nation, will arrive at Bhubaneswar airport around 11 pm tonight.In fact, it was initially announced that Modi will arrive in Bhubaneswar on Saturday, but in an official release from the Prime Minister’s Office issued on Thursday it was stated that he would arrive on Sunday.Official sources, however, said on Saturday afternoon that Modi will arrive in the temple city tonight by flying down from Visakhapatnam.After his night stay at the Raj Bhavan in Bhubaneswar, Modi will start his official engagements with the dedication of the National Institute of Science Education and Research (NISER) to the nationa at Jatni near Bhubaneswar around 9 am.After inagurating NISER, Modi will fly down to Puri visit the Shri Jagannath Temple.In the last phase of his tour on Sunday, the Prime Minister will fly down to Paradip from Puri to dedicate to the nation, the state of the art IndianOil refinery there.The Paradip Refinery will have a total capacity of 15 MMTPA.The Indane Maximization, or INDMAX unit at the refinery has been set up using indigenous technology to produce a higher quantity of LPG.The refinery is expected to unleash a new wave of industrialization in the hydrocarbon sector, and accelerate economic development in Eastern India.The Prime Minister will visit the Main Control Room, and the INDMAX unit at the refinery before addressing a public meeting.From Paradip, the Prime Minister will return to Visakhapatnam where he is scheduled to witness the operational demonstration and the International City Parade at the International Fleet Review late on Sunday afternoon.