Odisha Channel Bureau Bhubaneswar: In 2006, Water Initiatives Odisha (WIO) has warned that many parts of Odisha are already showing symptoms of desertification.The state is ‘developing’ from a drought prone to desert prone region.Desertification is a process of productivity loss of lands, and when severe, it leads to permanent damages to land, WIO said on the occasion of Earth Day on Friday. 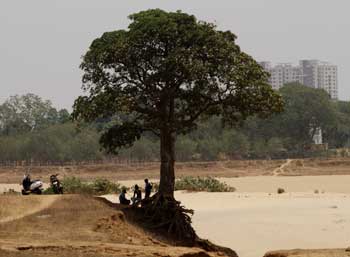 By analysing government statistics, WIO had said in 2006 that “in just 13 years, severely degraded land in the state had increased by 136 percent, barren land had increased by 69 per cent and land converted to non-agricultural uses had increased by 34 per cent.“In 1991-92, about 10 percent of total geographical area of the state was unfit for agriculture, forest and tree cover excluded. In 2004-05, such spread increased to nearly 17.5 per cent of total area of the state.” “Based on the rate of degradation we had then predicted that Odisha would go totally barren in about 150 years,” said Ranjan Panda, convenor of WIO. “As the state is facing worst ever heat and water crisis, we wanted to add up to our 2006 analysis and do some more calculations based on government statistics.We are shocked to find that the state will turn barren even much faster, if urgent measures are not taken to arrest desertification,” he added.Between 2005 and 2015, the barren and fallow land of the state has increased further by almost 50000 hectares to reach at 1753000 hectares.Adding the ‘culturable wastelands,’ that is at 375000 hectares, the degraded land of the state reaches to about 22 per cent of total geographical area.Then, the state has lost about 5 per cent (of total geographical area of state) forests in forest lands and 1 per cent tree cover in plantation areas during the last decade.This adds up the land degradation rate to 28 per cent of total geographical area.During this decade, agricultural land given away for other purposes has increased by a whopping 299000 hectares.We have every reason to believe that all this agricultural land has gone to developmental activities that does not contribute to ecological restoration, and hence have added to heat woes either by degrading water resources or increasing concrete cover.“If we add the agricultural land taken away for other purposes, that also cause degradation of fertile lands, another about 1.92 per cent of land stand degraded, the total degraded land of the state adds up to almost 30 per cent of its geographical area.That means, during the last ten years, the state degraded at least 195000 hectares of its land per year on an average,” Panda said in the statement.In this decade, the net sown area of the state has shrunk by as high as 243000 hectares indicating the reduction of water resources and increased episodes of drought.The state’s temperature is on an upward trend.Land degradation increases the devastating impacts of increased warming.It reduces the water retention capacity of the soil, making both surface water and ground water scarcer; and makes the land further vulnerable to erosion during rains and floods. All these factors increase the pace of desertification.This Earth Day, the state of Odisha must decide to mend its ways and drastically redesign development programmes that put emphasis on conservation of forests; rejuvenation of rivers and water bodies; reduction of coal fired power plants; increase in alternative energy sources; and promotion of land,” urged Panda.