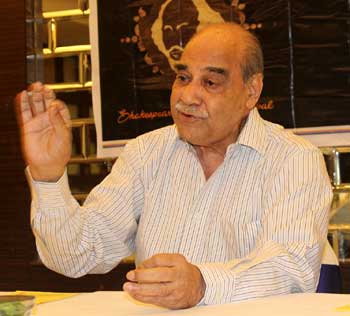 Odisha Channel Bureau
Bhubaneswar: The city-based Utkal Rangamanch Trust is all set to organise a three-day Shakespeare Theatre Festival at Rabindra Mandap auditorium here from April 24.The festival aims to bring Shakespeare plays to one venue at a time. Starting from Bhubaneswar, it will be staged in Mumbai, New Delhi and Kolkata and other cities in due course, according to Anant Mahapatra, founder of Utkal Rangamanch.

Mahapatra said while the State based theatre group ‘Think Foundation’ will stage the play Macbeth in Odia, New-Delhi based ‘Film & Theatre Society’ will stage Merchant of Venice in Hindi, and Kolkata-based ‘Naye Natua’ will stage Othello in Bengali on 24th, 25th and 26th April respectively.Shakespearean playsIn the 400th anniversary of Shakespeare’s, the question as to whether he is still relevant in a world that has changed radically, has assumed great urgency, according to Mahapatra.

He said that the readers today may find Shakespeare’s language impenetrable, (difficult to comprehend), University syllabi might have pushed him to margins but Shakespeare continues to permeate our emotional and intellectual lives through translations, and adaptation to stage and films.His plays continue to remind us of the glory and futility of human endeavors and of the complex city (and dark obscurants) of human motivation.

Scholars go on discovering new subtleties in his plays and ordinary men and woman watch his plays, fascinated and spellbound.Shakespeare’s influence is felt not only in the countries once colonized by the British but in countries like France, Germany and Europe and Russia, Africa, Asia and India in particular and even Afghanistan. Victor Hugo’s son was the best known French translator of Shakespeare and Boris Pasternak (Russia), has left several translations of ‘Hamlet’.A recent Afghan adaptation of “Loves Labour Lost” left audience in Kabul spellbound.It also led to the murder of the husband of one of the actress.) Apart from innumerable translations in all Regional Indian languages for the stage, popular Hindi films such as ‘Omkara’, ‘Haider’ and ‘Maqbool’ have been based on Shakespearean plays.

In Odia, more than 123 translations and adaptations of Shakespearean plays have been published, and two more plays “Macbeth” and “King Lear” are being released during this festival, Mahapatra informed.Every age (generation) has found in Shakespeare’s plays a mirror reflecting its deepest concerns and most painful dilemmas.The plays aid us in discovering new elusive aspects of human conditions.

As Jan Koh had said “Shakespeare in spite of the passage of four hundred years, remain our contemporary”.Utkal Rangamanch TrustMahapatra, who had pioneered Group Theatre movement by ‘Srujani’ in 1964 founded Utkal Rangamanch Trust in 1999 to revive the professional theatre in Odisha after all the old Theatres closed in Seventies with the lease of the Bhanja Kala Mandap by Culture Department, and a professional cast and crew staged regular three shows every week from 1st May 1999 till 2005 since culture Department did not renew the lease.

In this period, 20 plays were staged each for 20/30 shows regularly without break except in aftermath of the super cyclone in 1999.The Trust had organised seven days SAARC countries Woman Director’s Festival, five days of National Festival, three days of Regional Festival and seminars. Mahapatra was invited by National School of Drama (NSD) Ranga Mahotsav to stage plays directed by him for Utkal Rangamanch Trust in 2000, 2001 and 2002, continuously at New Delhi.

Utkal Rangamanch Trust organized for the First time “Theatre in Motion” project in which six important groups each from Kolkata, Mumbai and New Delhi performed every weekend two plays from 5th October to 31 December 2013 simultaneously at these three metros.