Odisha Channel Bureau Bhubaneswar: Many activists and members of the civil society of Odisha staged a token protest here on Wednesday evening to express their solidarity with the Narmada Bachao Andolan (NBA) which is consistently fighting for last 30 years for justice for two lakh displaced people. 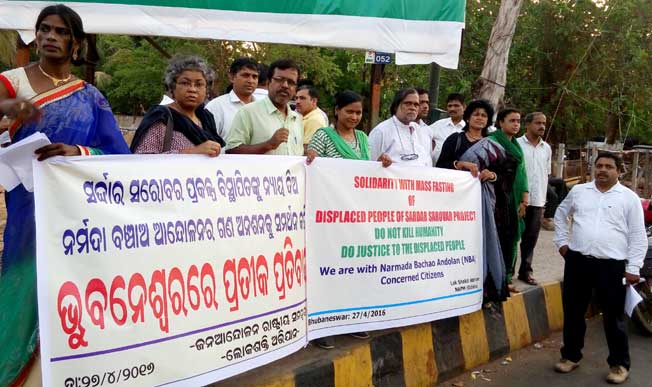 The group of protestors stood-up holding banners at the Master Canteen Square to extend their solidarity to the ongoing protest in the form of mass fasting led by NBA from April 26 to April 28 in Bhopal to get justice and not to submerge till their demands are not fulfilled.The protesters contended that “after Modi government came to power at the Centre, the dam height has been arbitrarily increased to 17 meters by which another 50,000 people will be displaced.Neither the Central government nor the Madhya Pradesh government is implementing the Supreme Court direction for rehabilitation with providing land to the farmers.”Raising the issue of displacement the protestors said that “in last 67 years of independent India, about 6 million people have been displaced from their homes out of which only about 40 percent of them have been rehabilitated and rest have been left on their destiny.” “This is completely violation of human right on the people of Narmada valley.Same thing is also happening in many projects like Lower Indri dam in Nuapada district of our state,” said Prafulla Samantara, President, Lok Shakti Abhiyan who led the ‘road side standing protest’.The activists also demanded for ‘no displacement further” and urged both the Central and the State governments to look into the matter of displacement seriously and work for rehabilitation and resettlement for the already displaced families in the country.