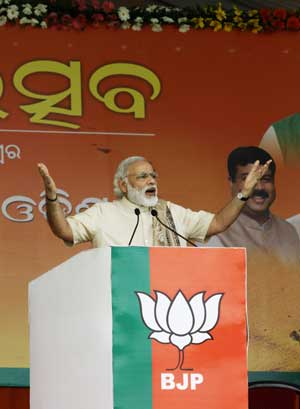 Odisha Channel Bureau BALESWAR: Launching a veiled attack on the Biju Janata Dal government, Prime Minister Narendra Modi sought people’s support bring Bharatiya Janata Party into power in Odisha.Before ending his hour-long speech at a rally to mark completion of two years of his government in the country, Modi said that development and BJP had become synonymous in the States where BJP is in power.He urged the thousands of people gathered at the rally to extend their support to BJP to ensure development of Odisha that has remained poor despite being rich in minerals with a long coastline and ports.Raising his latest slogan “Mera Desh Badal Raha Hai, Aage Badh Raha Hai”, the Prime Minister urged the people to make the Naveen Patnaik Government wake up from deep slumber.“Despite all natural resources in Odisha, why isn’t it developed as states like Maharashtra and Gujarat, BJP ruled states,” Modi queried.Reiterating balanced development in all regions of the country, Modi stressed the need for fighting poverty in Odisha and other States in the country’s eastern region.Observing that no one in power in the country in the past had come to furnish the reports of his works before the people, Modi spoke in detail about the welfare schemes that his government had implemented during the past two years for the welfare of the poor.The schemes that he referred in his address include schemes for the protection and development of girl child, ICDS scheme for children, loans for the poor, rural electrification, cooking gas for the women in poor households.Throughout his address, Modi focused on the alleviation of poverty in the country by making the poor empowered through proper implementation of the social welfare schemes.He claimed that the popularity of his government was growing across the country.He reiterated that his government was committed to the poor.He, however, did not utter a word about the mining scam, chit fund scam and farmer’s suicides that remain the main issues in Odisha.Union Tribal Affairs Minister Jual Oram and Petroleum Minister Dharmendra Pradhan and several other leaders of the BJP Odisha unit addressed the rally before Modi arrived and addressed the gathering.