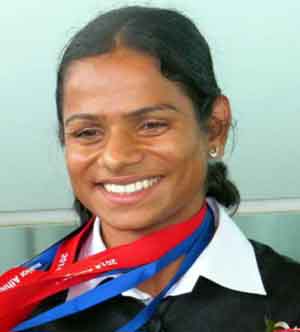 Odisha Channel Bureau Bhubaneswar: Odisha’s 20-year old Dutee Chand has become the latest Indian athlete to qualify for the Rio Olympics on Saturday.According to reports, Dutee beat the Olympic qualification mark of 11.32 seconds by clocking 11.30 seconds in the 100 meters race at the XVI International meet being held in G.Kosanov Memorial, Almaty, Kazakhstan.Dutee, who hails from Jajpur district of Odisha, is the 99th Indian athlete to qualify for this year’s Olympics being held in Rio de Janeiro.P.T.Usha had represented India in 1980 Olympics in the same category.The news about Dutee’s success soon spread across Odisha, and Chief Minister Naveen Patnaik congratulated her for qualifying for Rio2016.“Congratulate #Odisha sprinter Ms.Dutee Chand for qualifying for #Rio2016, wishing her triumph and success,” Patnaik tweeted.In a statement, Patnaik termed Dutee’s success historic and a pride for Odisha and the people of the State.The Chief Minister wished her all success in the Olympics in Olympics in women’s 100m.