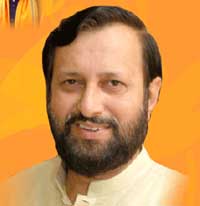 Odisha Channel Bureau Bhubaneswar, July 3: Union Minister and senior Bharatiya Janata Party leader Prakash Javadekar is scheduled to attend a meeting of the BJP legislators of Odisha here on Friday.Javadekar will attend the meeting of the BJP Legislature Party meeting as party’s Central observer where the newly-elected leaders were scheduled to elect their new leader who would lead them inside the Odisha Assembly.The election of the BJP Legislature Party had been delayed as Javadekar had failed to come down to Bhubaneswar earlier.State BJP president and Patnagarh legislature K.V.Singh Deo was working as the Leader of the BJP Legislature Party in the Assembly till the formal election of a new leader.The BJP has 10 legislators in the 147-member Odisha Assembly.Javadekar will visit Puri and meet the officials of the Departments of Forest and Environment and Information and Public Relations of the State Government before attending the meeting of the BJP legislators at the party’s State headquarters.