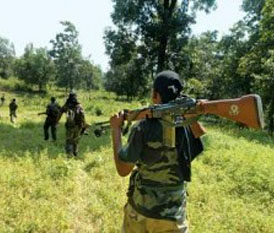 Odisha Channel Bureau PHULBANI: Five innocent persons, including two women and a child, were killed by policemen engaged in anti-Maoist operation in Kandhamal district.The incident occurred near Kurtumgarh village under Tumudibandha Block on Friday night when nine persons were returning to their village in an auto-rickshaw.While five were killed, at least two (parents of the child who was killed), were injured in the incident.The villagers came in between when security personnel were engaged in exchange of fire from a hillock where naxals were at a higher position on the other side of the road, said Inspector General of Police (Southern Range) Amitabh Thakur.Aggrieved over the police action, the villagers have blocked the National Highway No.224 demanding adequate compensation for those killed in police firing.Meanwhile, Chief Minister Naveen Patnaik announced compensation of Rs.5 lakh each to be paid to the next of kin of the five civilians killed in police firing.The Chief Minister also ordered a judicial inquiry into the incident.Patnaik, however, did not prefer to tweet about the killing of the innocent villagers.In the meantime, convenor of the Campaign Against Fabricated Cases (CAFC), Odisha Narendra Mohanty said that six persons were killed in the Kandhamal firing.Condemned the killing of innocent people, Mohanty said that the victims were daily labourers and belonged to tribal and Dalit communities and were returning to their village after receiving their wages under MGNREGA through bank when the police fired at them.He demanded an impartial and high level inquiry by a Special Investigation Team (SIT) under guidance of judiciary.Mohanty also demanded that Kandhamal Superintendent of Police and police personnel responsible for killings be placed under suspension and cases of murder be registered against them.He also demanded that a sum of Rs.50 lakh each be paid as compensation to bereaved