Odisha Channel Bureau
Bhubaneswar: As the Naveen Patnaik Government was getting ready to move appropriate authorities to stake the claim that Rasagola had its origins in Odisha, the people of the State celebrated the Rasagola Day with pride on Sunday.With Rasagola Divas tending in Twitter, friends and families were seen enjoying the sweet at homes and outside.The pictures of Rasagola virtually appeared as celebrities in the social media.

As Odisha and Bengal were on an ongoing row over the origin of Rasagola, the people celebrated the Day by wishing each other through messages in different modes. 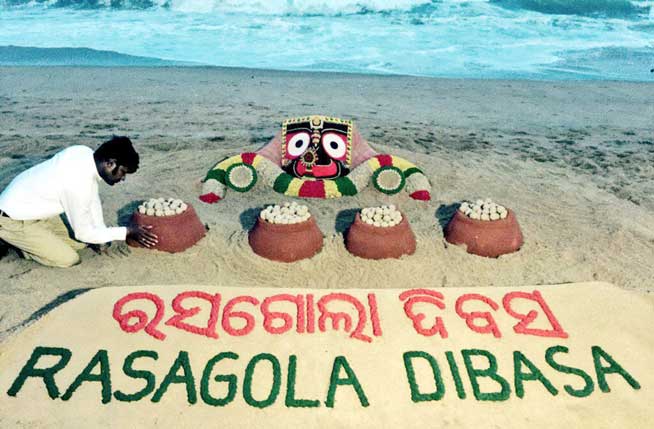 A committee formed by Odisha government to settle the issue of Rasagola’s origin had recently confirmed that the famed sweet had its roots in Odisha.The committee, headed Jagannath cult scholar Asit Mohanty, had concluded in its report submitted to the State government that the Rasagola existed in Odisha since 15th-16th Century as it has been mentioned in the ‘Dandi Ramayana’.

The committee also refuted West Bengal’s claim that Rasagola had reached Odisha under the influence of Shri Chaitanya.The neighbouring state had also claimed that chhena (cottage cheese), from which Rasagola is made, was invented in Bengal.The committee also mentioned in its report that selections from Odia literature published by Calcutta University in 1924 had references to the sweet’s origin in Odisha.

Adding beauty to the celebrations was an impressive sand sculpture by well-known sand artist Sudarsan Pattnaik.He carved a sculpture on sand showing pots full of Rasagola and an image of Lord Jagannath on Puri beach to mark the Rasagola Divas celebrations.The photographs of his sculpture was widely published, liked and shared in Twitter and Facebook.