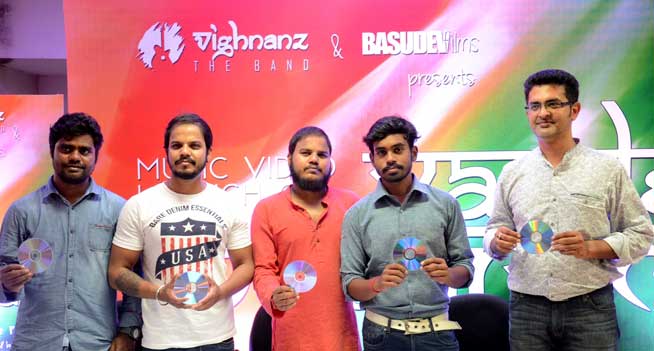 Vighnanz, the band, comprises 6 members- Durga – lead vocalist, Anup – lead guitars, Hrishi – bass guitars, Zubin – drums, Christo – keyboards and Krushna – percussions.The lyrics to the song is penned down by Saroj and sung by G.Durga, the lead vocalist of the band.“The music video is dedicated to all the Indians who have done our country proud.Vande Mataram is a humble gesture from our band to celebrate the unity and oneness we have amongst ourselves despite belonging to various religions and following different cultures.India is a secular country and our music video celebrates that,” said Durga, the lead singer of the band.The video is extensively shot in and around Cuttack.Basudev Films who have directed this music video have brought in elements like sports and children as they stand as a symbol that unifies different communities in India.“We have been associated with Vighnanz since its inception in the year 2007.Together we have produced 2 albums and done around 300 shows across India.Apart from the mainline Ollywood industry songs, there are different genres of music that needs to be cultured in Odisha so that there is a wholesome development in the music industry.Odisha has many talented musicians and they need a platform to showcase their compositions.This is a humble attempt and I’m sure our youth will love this different taste in music,” said Satyabrat Sanu Ratho, founder-director of Prelude Productions.