Odisha Channel Bureau
BHUBANESWAR: Even as Odisha government deployed hundreds of policemen to prevent thousands of farmers from entering Bhubaneswar on Wednesday to stage a rally in the city to highlight their demands, Chief Minister Naveen Patnaik sought Prime Minister Narendra Modi’s intervention to ensure proper crop loan disbursal and payment on paddy sale to farmers in the State.“Keeping in view the difficulties of farmers’ families and to facilitate them for crop loan and procurement payments, I seek your intervention,” Patnaik wrote to Modi. 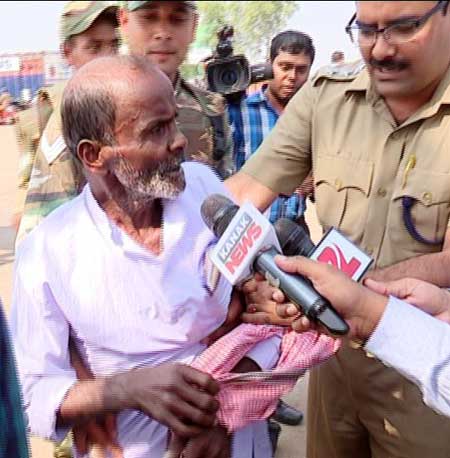 Interestingly, Patnaik, who was first among the few non-NDA Chief Ministers to welcome demonetisation, said adequate currency should be made available to the District Central Cooperative Banks (DCCBs) by the currency chest branches of commercial banks and this should be monitored by the Reserve Bank of India. “The DCCBs should provide crop loans to farmer members and also to pay their paddy procurement proceeds as well as insurance claims,” said Patnaik in his letter to Modi.

The Chief Minister said that the restriction imposed on Primary Agricultural Cooperative Societies (PACS) to draw Rs.24,000 per week may be lifted so that the organisations can cater to the credit requirement of their farmer members. “The procurement dues of the farmers being transferred from a government account, irrespective of the amount, may be allowed to be credited to the farmer’s account without insisting on the time consuming process of KYC verification,” said Patnaik.

The demonetisation of high value Rs.500 and Rs.1000 notes and restrictions on the DCCBs were leading to a severe liquidity crunch, he added.Besides, the currency chest branches of commercial banks were not providing cash to the DCCBs to cope with the demands of the farmers at the PACS level for their Rabi crop operation, said Patnaik.

The DCCBs were unable to cater to the demand for crop loans, procurement proceeds and insurance claims pertaining to Kharif-2015, he said.“We are finding it difficult to transfer the procurement price of paddy from the Apex State Co-operative bank accounts to the farmers’ accounts in different nationalised banks, cooperative banks and RRBs, if it is a Jan Dhan account.Such transfer were rejected in many cases causing enormous hardship to the farmers,” he said. On the other hand, the police had arrested convenor of Navnirman Krushak Sangathan three days before the farmers arrived in Bhubaneswar for the rally on Wednesday.NKS leaders – Akshaya Kumar and Seshadev Nanda – are still in judicial custody despite opposition Congress, BJP and many other political parties and mass organisations demanding immediate release of the two leaders. “Are we not experiencing unprecedented suppression of dissenting voices? What is the government so scared of?”, twitted Leader of Opposition Narasingha Mishra on Wednesday.

The opposition also stalled the State Assembly proceedings criticising the police action against the agitating farmers who were stopped at various places, including bus stands and railway stations.Anyone walking down the streets of Bhubaneswar looking like a farmer was also harassed by the police.Opposition parties are of the view that Wednesday’s “unwarranted police action” against the agitating farmers may spoil the chances of the ruling Biju Janata Dal in winning the panchayat elections in February next year as farmers are getting ready to intensify their agitation under the banner of NKS.