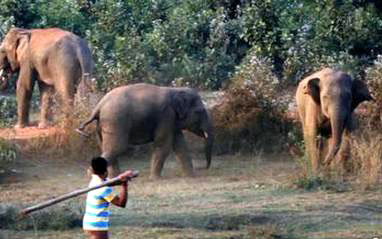 In a letter to the Principal Chief Conservator of Forests (Wildlife) on Monday, WSO secretary Biswajit Mohanty has said that that on 6th January’18, a 56 year old man was gored by a Tusker in Phatatangara near Parachat village in Khamar range. His condition is very critical. The very next day and within 13 hours another person was attacked by a Tusker; 45 year old man killed near Badibahal village, Pabitranagar, in the Talcher range.

“We suspect both attacks were by the same tusker since the distance between the two is around 10 kms and both victims were identically gored with the tusks. We also suspect this tusker had killed three persons in quick succession as detailed below less than a month ago in the Khamar Range,” said Mohanty.

All the above three locations are close to each other and hence we believe the same tusker is responsible though we need to verify this with the footprints, he added.

“The repeated attacks on human lives has created a panic situation in the area and agitated the villagers. Failure to control the particular elephant may result in retaliation by the villagers who may invite poachers to kill tuskers and result in violent attacks on department staff too.”

“Since the Khamar/Talcher Tusker is suspected to have already claimed four lives and injured one, it is necessary to control him now before he kills again. A similar problem tusker of Kamakhyanagar Range, which had a similar reputation of killing more than 25 humans, had been tranquilized and the tusks trimmed in Dec’2016. It is heartening to note that though nine months have elapsed we have not heard of any more attacks by him,” Mohanty added.

Another problem tusker is also known to have claimed at least 12 human lives in Chhendipada, Kaniha (Angul Division) and Handapa, Bamur (Athamalik Divison). He continues to remain at large and may attack again. Though there have been attempts to catch him he has eluded the staff so far.

The veterinary doctors who cut the tusks of Kamakhyanagar tusker treated several old infected abscesses on hind leg, possibly from bullet or arrow shots, which lead to abnormal behaviour. These two aggressive tuskers may also be carrying niggling wounds which if treated may result in change in behavior.

The department needs to keep a database of each such problem tusker including their size (from footprints) and typical features. A dedicated team may continuously track and take steps to tranquilise these two problem tuskers and such effort should continue for at least two weeks.

“We therefore request you to set up a dedicated special squad with at least two vehicles who should be monitored directly by your office. We also request to deploy a tranquillisation team located at Angul which can spring into action the moment the tusker is located. “We urge you to take immediate steps in view of the urgency of the matter as we apprehend more loss of precious human lives leading to tragic consequences as local villagers may do retaliatory killing,” Mohanty pleaded in the letter.