Odisha Channel Bureau
Bhubaneswar: After a successful opening day, the second day of the JD Centre of Art’s 12th International Film Festival on Art & Artists on Saturday was full of equally exciting content including screenings of multiple award-winning films, two workshops, and the continuation of exhibitions on Odia handicrafts.

The day began with the screening of Atul by filmmaker Kamal Swaroop. After the screening, Swaroop had a Question-Answer session about his film with the audience. 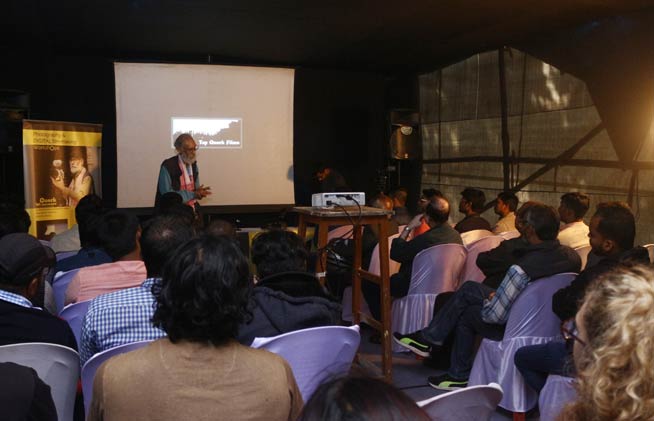 Meanwhile, Delhi-based award-winning filmmaker Nandan Saxena was back for the eighth time for his much-loved series of workshops on filmmaking, this time titled Cinematic Films on a Budget: Digital Filmmaking, where he spoke about the parallels between literature and cinematography.

Saxena stressed the importance of having a large vocabulary of images, sounds, and spacing to create an “evocation” in the audience – just as one would with poetry. This echoed with the stirring talk given on Friday by eminent actress and filmmaker Nandita Das.

Farhadi’s Salesman told the story of a couple acting in legendary American playwright Arthur Miller’s The Death of a Salesman, who struggle to regain control of their lives after a series of frightening events threaten their physical and mental well-being. Many students were in attendance today, and were able to catch the architecture-based film by Avijit M Kishore, Nostalgia for the Future. The Mumbai-based director introduced the film.

The day ended with the monthly edition of JDCA’s Meet the Artist Series. The session was a commemorative presentation of the life and work of renowned Odia filmmaker, the late Nirad Mohapatra. The discussion included his brother, eminent journalist-editor Sampad Mahapatra, film director Susant Lulu Mishra, film makers and fellow FTII alumni, Kamal Swaroop and Sudhir Tandon, and was moderated by filmmaker Birendra Das.

The event concluded with the showing of Nirad Mohapatra’s documentary Chhau Dane of Mayurbhanj and was followed by his iconic feature film, Maya Miriga (The Mirage), which competed in the Cannes Film Festival in 1984 and won Best Third World Film at the Mannheim-Heidelberg International Film Festival in Germany the same year. Other films shown during the day include young Odia filmmaker Sanjay Bhatt’s films, one of which was on the renowned veteran Odia artist Jagdish Kanungo.

The festival continues tomorrow, Sunday at the IDCOL Auditorium. Animator and Chief Designer at Tata Interactive Manisha Mohan will deliver her illustrated lecture on Animation and New Media in the afternoon.

JDCA has variety of film in store for the final day of the event, including the award-winning Swiss film, My Life as a Zucchini, one of the most iconic animation film based on the poignant story of an orphan, at noon.

Veteran Odia filmmaker Raju Mishra’s Lakshmi Ra Abhisara will be shown, as well as Kapila based on celebrated Pondicherry-based Odia writer, Manoj Das, at 10 am; both the filmmaker and the writer will be present.

A bouquet of French animation films will be screened as a part of the ongoing Festival of French Culture in India, Bonjour India Festival. There will also be a collection of shorts from international filmmakers. There will be a variety of iconic films celebrating Odisha; including films by Nirad Mohapatra: Ahilyara Bahaghara, Pata Paintings of Orissa, and Nirmal Chander’s The Face Behind the Mask on Chhau dancers.

The festival closes with an illustrated talk by one of India’s foremost photographer’s Raghu Rai and the Oscar-winning Argentinian film, The Secret in their Eyes by Juan Jose Campanella.