Politics of shoes, eggs and abuses; a saga of political hooliganism

OPINION
By Kedar Mishra
A few days ago, popular news channel of OTV invited a very unusual guest to their celebrity interview show “Khola Katha”. The only credibility and achievement of the guest was hurling eggs at Chief Minister Naveen Patnaik at a public meeting. Her bizarre act of violence was overzealously celebrated by the television channel, which is owned and promoted by Baijayant Panda, the suspended BJD MP of Kendrapara.

Earlier Panda faced similar kind of egg hurling in his constituency which was widely condemned by the media and the civil society. This time when the Chief Minister faced same violent behavior from a BJP worker, OTV grabbed the incident as an opportunity to settle a political score with Patnaik and tried every trick to project the gutter politics as a heroic act of protest. The show created a dangerous precedent where an abuser or insane attacker can aspire to get a coveted hot seat in the television newsroom. In fact, that was a kind of instigation in disguise to attack the Chief Minister. “Attack the CM and grab the hot seat in primetime’’- perhaps that was the hidden message from OTV!! 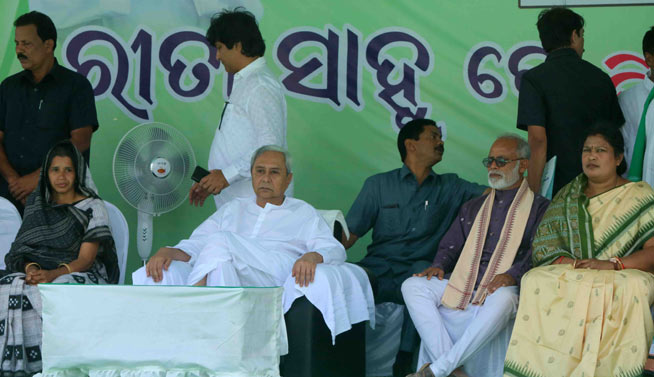 In last few days, when the Bijepur by-election is on full swing, we had seen a couple of incidents which was enough to shake up the conscience of Odia society. In a bizarre move a group of BJP workers attacked the official residence of V. Karthikeyan Pandian, private secretary of the Chief Minister in Bhubaneswar.

Again on Tuesday when the Chief Minister was campaigning in Bijepur constituency, at a village named Kumbhari a young man attacked the CM by his shoes. It was one of the filthiest things one expects in politics, and political parties promoting such violent acts as manifestation of public anger against ruling establishment are setting a dangerous trend of insanity.

Kartik Meher, the young man who attacked the Chief Minister was condemned by every political party, but BJP is trying to brand Kartik’s action as a symbol of popular anger against Patnaik. By planting someone to hurl an egg or shoe can at best be a part of a filthiest game plan of a political party. Every political party must come out with a clear line of condemnation for such criminal acts and media should have the guts to term a crime as crime. Glorifying such violent protesters and insane attackers as heroic protesters will certainly make politics putrid.

Kartik’s hurling of slippers at Patnaik may strengthen the image of the Chief Minister and his efforts to win the 2019 election will be easier. Attack makes a politician more popular and as an extraordinarily cool person Patnaik is used to dust out such attacks from his sleeve in an eye-blink. After the attack Patnaik emphatically walked to continue his campaigning for the BJD nominee.

On the other hand, his opponents were desperately trying to defend their positions. In Bijepur campaign, BJP is trying to attack, abuse and downgrade Patnaik, but clearly unmoved by the attack Patnaik goes on speaking all good and positive words about his governance. He never takes names or joins issues with BJP leaders. In public meetings his no-nonsense speeches make him more endearing. Perhaps that is the biggest frustration his opponents are suffering. Odisha BJP under Union Minister Dharmendra Pradhan has developed an aggressive strategy to counter BJD, but very carefully Patnaik diffuses BJP’s aggression by completely ignoring them.

2018 is going to be the most crucial year in Odisha politics. BJD is going to face a ruthless and aggressive BJP as its new principal opponent. But in a hurry to unsettle Patnaik, BJP is playing reckless shots which make them vulnerable to getting out for zero. In cricketing language Patnaik is like a wall at the crease. He knows how to face the bouncers and also knows very well when to hit the ball out of the boundary.

(Kedar Mishra is a freelance writer, political commentator and art critic. He can be reached at kedarsikha@gmail.com)