Odisha Channel Bureau
Bhubaneswar: Chilika Development Authority conducted its first annual monitoring of the Chilika Lake on Saturday with a view to map out the number and extent of the flagship species and to study the hydrological impacts of removal of pen culture (locally known as gheries). 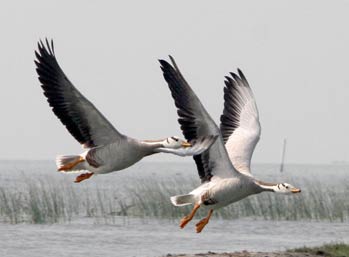 As many as 28 teams consisting of official member from office of PCCF Wildlife, DFO, Wildlife Chilika, CDA, Honorary wildlife warden, NGOs and local motor boat association participated in the monitoring.

Significantly, all the motorized boats of the fishermen and the tourist boats stopped plying between Saturday morning and noon making the monitoring programme highly successful.

CDA authorities expressed gratitude to the owners of all the motorised boats for their cooperation during the monitoring programme by keeping away from the lake which itself was one of its kind for the first time. The results of the monitoring are being analyzed by plotting the locational GPS and the finer detail are likely to take some time.

Following are the major findings of the monitoring:

155 numbers of endangered Irrawaddy dolphins, the flagship species of Chilika Lake was spotted during monitoring making Chilika the single largest habitat of this species in the world. This compares favorably with 152 dolphins sighted by Wildlife Wing during the annual census of the current year.

However, the number of sighting is more compared to the last year sighting of around 100 dolphins during the annual census. The range of population is tagged between 145 and 160.

The dolphins are now seen at different sectors of the lake where they were not seen before, due to removal of obstruction for their migration. While this has raised the hope of eco-tourism at different locations, high degree of cautions is necessary to preserve them in perpetuity by taking up responsible tourism within the carrying capacity for these endangered animals.

The lake at present is home to around 0.9 million birds, which was similar to the trend of population over the years. No new species was identified during the monitoring. However, it has been observed that the birds, mainly the migratory ducks, have started colonising new areas previously covered by pen culture as their new habitat. Barunakuda and the coasts of Krushnaprasad block offer tremendous opportunity for ecotourism due to congregation of the wintering guest along these new areas. Some waders have already started leaving the lake but other migratory birds have prolonged their stay mainly because of the cool nights and increased available food in the lagoon.

The evicted area from illegal gheries amounting to 152.5 sq km has not been reconstructed and is free from pen culture. The sea grass bed which had reduced to 86 sq.kms during 2016 has shown a marked improvement and with ground frothing stands at 135. Sq.kms indicating improved hydrological condition of the lake. This will provide ample opportunity for the mud crabs to grow.

Sponge, which was documented by ZSI to be present in the lake before 1985 and had disappeared thereafter, have made their appearance indicating a clean and healthy ecosystem. Spongilla alba species was identified by the monitoring team in certain locations.

The use of zero nets for fishing has reduced significantly, but they still pose the maximum threats to the ecosystem of the lake as they are hastening siltation. Un-scientific and illogical lying of the Khandas is also reducing the migratory path of the juveniles and is adding to siltation of the lake.

All the three channels and the Palur canal meant for auto recruitment of fish and for discharge of sediments are free from obstruction. But, the number of nets used in the outer channel for fishing is silting up the channel at a very fast pace. This needs to be discussed with the fishermen of these localities to prolong the life of the lagoon by promoting responsible fishery and adhering to certain self restrictions to reduce the siltation.